Since starting back at Uni I've been making a concerted effort to use the bike for part of my morning commute. Depending on how early I can scrape my head off the pillow I have 3 choices of train from my village and 3 ride distances at the other end. When I'm feeling extra awake it's the earliest train and 15 miles, when lazy it's the latest train and about 3 miles. Somehow my lovely Surly seems wasted on this lazy option so I've equipped my self with what I see as an urban stealth machine (all minimal and black). This had it's maiden commute this morning, and like all my biking it was a mixture of thrills and spills.

I wanted to ride the 3 miles hard and nippy, I zipped through traffic, I cheekily cut corners at the lights, I decided to whip over a pedestrian crossing and this is where my vision of being cool and sleek unravelled. I skidded to a bit of a halt by some railings and just couldn't unclip from my pedals, brand new and tightly sprung, they just weren't for releasing my cleats. I was wedged too close to the railings to change my mind about stopping, there was no where to pedal out off the situation, I knew I was going to go over. Faced with a wobble into the road or a flower bed I shifted my weight and let the foliage break my fall. I went as gracefully as possible but it was far from cool. I ripped one foot free which promptly allowed the pedals to spin round and smash me in the shin. I scraped myself out of the flower bed and got back on the bike. I arrived at Uni dirty and bleeding. I set to the pedals with my multi-tool, and rest assured the shrubbery of Blackpool went undamaged on my return journey. 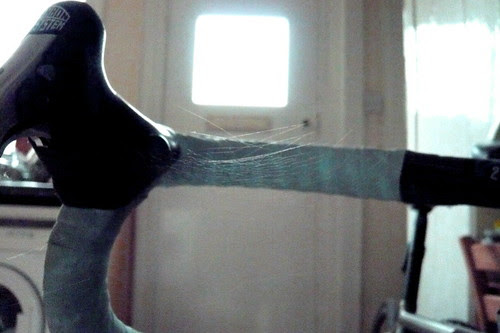 See that? That's a cobweb, spun between the hoods of my Ergos by some half-pint arachnid. Inevitable, that injuries are followed by insults that only serve to annoy you more when you are already not feeling at your best. Rest, ice, ibuprofen... grrrr.

at this time of year i find it increasingly hard to get up in the mornings, to find the motivation to work, wash and eat, let alone to ride. wake up and the sun is shining (again) in a clear blue sky (again). seize the moment. work can wait. a couple of phone calls and the rendevous is made, we ride, talk, laugh, ride some more. there are mishaps, giggling, new trails, chocolate brownies, all the good things, and above all, so much hill-to-hill sunshine that we ride and ride and ride some more, an unintentional epic, just one more hill/trail/singletrack/tree over and over again. grovel home, steadily freezing as the post-4pm winter sun snatches away the warmth from the biting north wind. golden light and leaves, freshly ploughed fields, autumn is lovely but blimey is it cold...

later, stuffed to the gills with pie and potatoes, legs warm with effort and eyelids drooping, sit at the desk and file memories away. plot the route on gmap, it looks like a pile of spaghetti and the mileage tots up to a cool 45 miles.

Short cut up a climb and cut along the forest drive to the concrete climb and the descent. Chat, laugh, Dave spinning like a roadie monkey. Lovely, welcome feelings of fatigue not felt in weeks.

Nearly back at the car. I can see the town, taste the sandwiches, smell the hot tea. Better do that work this afternoon, or maybe get a DVD. Got lots of washing to sort out and better run the hoover over after our rugby party.

What is that rock doing coming towards my front wheel so fast? Ahhhhhhhhhhh, (I was thinking about sandwiches).

Why am I upside down in a blackberry bush? Pain searing through my thigh like the worst ever big-brother-dead-leg. Front wheel buckled, can't pedal. Tears and hugs.

So I just got back from my first swim in 10 months. I went a lane slower than I used to and just chilled with the Freds. It was fab.

Swimming - if it weren't for the running eyes, stinking skin and itchy hair afterwards - is great. You get a sort of all over body fatigue afterwards, like your muscles have been gently kneaded by a half-hearted osteopath. I might go again. I might, although I might go for a bike ride instead.
1 comment:

Oh Dusk til Dawn. I love it. Misty forests, bleary-eyed cyclists, hysterical, over-tired friends and supporters. It is lovely and cosy and warm in a cold, shivery, sweaty, painful sort of a way. For me it was my first 12 hour pair. Well I say 12 hour, we managed 6 before an early crash by Rob left him with no feeling in his right leg. We were forced to retire and shiver the rest of the night out in our tent. But until then I was riding ok - the best bit was riding with the 2 solo male leaders for half a lap, chatting a bit to them and asking them if they thought I was riding fast enough (I'm new to all this top-speed nonsense). They suggested I was but I passed anyway. Between you and me I regretted that in lap 3 when my legs were far from feeling fresh!

As Jenn says, D2D marks the end of the enduro season. Unlike many, I do not welcome this news. I am learning to train and rest with the waves of the seasons but find the thought of months of road riding ahead terrifying. Sunset at the top of the Quantocks on a Thursday night will never compare with neoprene-clad road miles for me. But I'm doing my first season of cross country this winter and can start running again, so I have things to look forward to.

But as for right now, I am having 2 weeks off completely - an act never before known to man (well, to Fi). The weird thing is I don't mind. I have such a clear, focused idea of what I want out of next year and I know that resting now will mean I can come back stronger. So pass the shortbread and pour the tea...

And weren't those jumping mice cute.
No comments:

Well, Dusk til Dawn has been and gone. Achey backs and knees are being stretched, chafed unmentionables delicately dabbed with Savlon, and 'second elevenses' are being consumed in a guilt-free manner all across the country. Here included. The race rocked, as Thetford races are apt to - masses of singletrack, a very tough course despite there being virtually no climbing, friendly riders, great atmosphere, fun and giggles all round. Add in bombholes, bouncing mice, thick mist and stars and - finally! - a night event in which I had absolutely no problems whatsoever with lighting. A big thank you to USE for pulling out the stops and equipping many racers with the new Exposure lights - I could have run on the Joystick Maxx and its piggyback cell alone for the entire race, and it was only when I started passing riders whose lights had failed mid-lap that the sense of security in having twelve hours of bright light started to sink in. Add in a bagful of Torq products for second place and I'm set up for winter, with some great memories to tide me over til 2009.

D2D is the traditional season closer, marking the end of the UK's enduro season. Yes, there are odds and ends between now and next spring (including the Thetford Winter Enduros and Gorrick Spring series, way too good to ever be called odds and ends, sorry chaps!) but nothing which requires the same intensity of resting, planning, packing and travelling that the summer season does. I am thoroughly worn out; it's been a stupidly busy year, and speaking to racing friends before the race revealed that we were all steeling ourselves for 'one more race'. There are so many events here now that you could race nearly every weekend if you wanted to; as it is we have to pick and choose, because nobody can be in a condition to race that frequently, no matter how good they are. If I got anything wrong this year, it was doing too much, but then doing too much is what I enjoy and to a certain extent what I am good at, too...

The Blasted Ribs (as they've come to be known) have meant that my season has ended with a bit of a fizzle, rather than a bang. The cancellation of the 3 Peaks put a dampener on things and I'd have loved to win at Thetford for a second time but limited lungs put paid to that. As it was I placed amongst the top ten men, caught, passed and dropped my boss (sorry JP), and rode 2:1 for 12 laps (145 miles incl prologue), all of which were goals for the night and all of which make me very happy.

Now, I have time to heal, slowly and properly. I can stay up too late when I want to, I can ride every day without having to think about resting. I can ride my lovely, lovely road bike exclusively for days on end without having to worry about the singlespeed feeling the 'wrong shape' when I get back onto it, I don't have to spend endless amounts of time planning event logisitcs and tidying up afterwards. And I can eat a whole packet of M&S caramel shortcakes in a 24 hour period without feeling guilty about it, because winter is coming and I need some seal fleece back. Ahem... More tea?