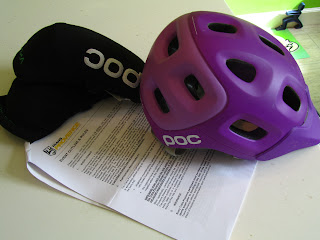 I've kept this one pretty quite this year to avoid my nerves getting the better of me, but it's now too close to keep quiet much longer....

Towards the end of last year, Chris and I both got e-mails confirming our place on this year's Trans Provence . When I had submitted my application for a place on the race, making it clear that I wouldn't be a real competitor in the race and that I'd probably be dead last, but that I'd really enjoy it and be a cheery rider, I hadn't expected to hear any more. Don't get me wrong, I know that I know how to ride a bike, but the TP? It's not one for the faint hearted!

Our friend Dan won the first TP and had come back tanned and smiling with lots of great stories of the trails. Jenn has also worked on the TP a couple of times and had equally good tales to tell. In fact, it's probably Jenn who first sowed the seed in my mind about doing the race...I got an e-mail about this time last year from her telling me that some spaces had become available on the race and asked if I'd be interested. Although I was very interested, I couldn't get the time off work, so had to let the opportunity pass.

But the seed was sown, so after checking out the details of the event, watching some of the footage of the race, I decided I didn't have much to lose by applying for a place. Chris had been riding with Ash and Dan in Basel a few months before, so he had already decided to apply for a place. The chances of us both getting a place were slim, but I figured it was worth a go and if I didn't get a place and Chris did, I could always volunteer to help out.

A day or so after submitting my application, an excited text from Chris told me that we'd both got a place. A quick check of my e-mail confirmed it.

Not much work got done for the rest of that afternoon!

That evening Chris and I giggled a lot and looked at the list of riders to see who else was going to be racing... there were plenty of big names as well as a few more familiar ones...Jo Carwell, fellow Scottish Minx!  And Dan and his fiancee Jo were going to be working on the race too. So at least there'd be some familiar faces.

I set about planning my training, in so far as I ever really plan any training, with lots of big rides planned for the intervening months after the end of the cross season. However, as some of you will already know, things didn't quite go to plan when I managed to smash myself up riding at Innerleithen and spent almost 3 months off the bike.

I planned to start the year a-fresh and get out riding in as many different places as possible to get myself out of my comfort zone. The mild, relatively dry winter meant I was able to get out lots early on in the year, followed by a really successful trip to Ciclo Montana in May where I learned lots of new skills.

A trip to visit Dan and Jo in Chamonix helped boost my confidence too, but there was still a lot to do.

After winning some elbow pads at the POC King and Queen of the Hill at Tweedlove, I spoke to the lovely people at 2 Pure and they agreed to help me out with a few POC bits and pieces for the TP to help me stop breaking myself.

Then, unfortunately work started getting in the way (why does it always do that?) and I had to go off to India with work for 3 weeks with no access to a bike (mind you, it was so hot and the roads were so insane, I'm not sure I would have wanted to ride). The closest I got to a bike for those 3 weeks was the static bike in the hotel gym and the rickshaws I saw on my way to work. Then, disaster struck and the day before I was due to leave, I got the dreaded Delhi Belly!

So although I had timed my return home so that I arrived home on time for the August bank holiday weekend, my plans for 3 days of riding bikes back home were scuppered and I've spent the weekend feeling quite poorly.

Now I can see on the TP website that I've only got 26 days to go and I'm getting more than a little bit nervous. I know I'll be able to ride the trails (maybe not all of the trails all of the time, but enough of them), but I'm not as fit or strong as I'd hoped to be by this time. Although I know I'm not really a competitor in the race, especially when I look at the other girls who are riding, I'd still like to feel confident that I was at my peak.

26 days is still 26 days though and there are still 3 weekends of riding as well as evening rides to be had between now and the end of September. I've also managed to arrange to head out to France a few days early to ride with Dan and Jo in Chamonix before heading down to Provence (and Dan's assured me he has trails already planned out for me).

So now all I need to do is shake this Delhi Belly and then ride, ride, ride for the next few weeks... what could possibly go wrong?