How can you enter a race by mistake? That's just ridiculous!

I spent most of last week ill in bed with the flu feeling very sorry for myself. When I started to feel a wee bit better, I decided that I needed to start setting myself some targets for this year. So, I started jotting down some ideas of rides I really want to do (some of which I'd planned to do last year but ended up not doing for various reasons), some places I wanted to visit, some friends I need to catch up with and so on.

Then Chris suggested I enter the Innerleithen Enduro at the end of this month. "What is it?" I asked..."Like it says, it's an enduro at Innerleithen. Dan's organising it."

Then I got an e-mail from Dan asking if I wanted any coaching before the race. Again, I thought I might as well take him up on the offer. He's planning the course, so it would be good to get some tips from him.

So, Dan picked me up this morning and we headed down to Innerleithen to ride the course and get an idea of what it's all about. It became obvious on the drive down that it wasn't an enduro in the sense that I'm used to...this one is a downhill enduro.

At this point, I should point out that I've never done any downhilling in my life, never mind done a downhill race! But, I thought I might be able to make up some time on the climbs and mince my way down the downhill bits....nope, that's not an option either...the climbs aren't part of the race.

Dan explained this as we were riding up to the top the first time and I started to realise what I'd got myself into.

We spent the next few hours messing about on different bits of the course, trying bits time and again until I cleared it, Dan talking me through how to ride the really techy bits (whilst I figured out exactly where I'd have to jump off the bike and run), and generally giving me an idea of what the course is all about.

So I've got next weekend to head back down to Innerleithen to have another go before the race. I might have to try to squeeze in some night rides and play about on the big bike to figure out how it works.

I've looked over the entry list, but since I've never done any downhilling, none of the names mean anything to me (except Crawford Carrick-Anderson), so I've got no idea what I'll be up against. Since my main aim for the day will be just to get down the hill three times in one piece, I think there's a pretty good chance that I'll manage to do the race in a record slow time, so maybe I should be practicing jumping off the bike and getting out of fast people's way.

Now I just have to try to get hold of a full face helmet! 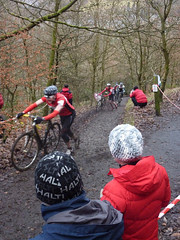 one: bimble up the valley and back to spectate at the excellent todcross. watching strong riders struggling to haul themselves up the chimay cobbles of doom confirmed i'd made the right decision to watch and not take part. no love for racing this time around. 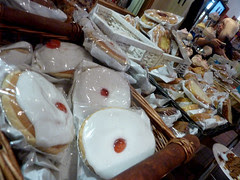 two: round delamere with friends. fresh trails and fresh air, a happy amount of trees, flowing singletrack, a bit of sunshine. smiles, giggles and lots and lots (and lots) of cake. delicious. 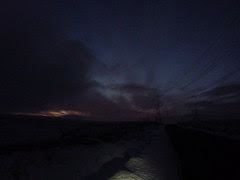 three: road ride, the longer usual loop that has been beyond reach for a while. along, down, drag, up, down, up, along. all safely in the bubble of light and faith that i know and love.