Ups and Downs but not quite outs 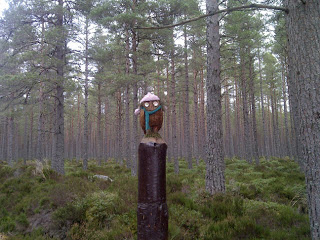 The last few months have seen their fair share of ups and downs...

The freakish cold weather meant that most of the trails around here were either under too much snow to be rideable or were so waterlogged that the amount of damage riding would do to the trails just wasn't worth it (not to mention the amount of mud on kit and bike that would need cleaning). This meant that riding options were a bit limited. The local trail centres at Glentress and Innerleithen were rideable for a bit but then they got hit by the snow and were pretty much off limits for a month.

Unfortunately I had also booked myself on a 1-1 skills coaching session with Andy at Dirt School, which had to be postponed because the trails were so icy that the only skills I would have learned would've been how to land on my bum after skeiting* on the ice (*Scottish for ...oh never mind).

So my plans of world domination after honing my skills were thwarted again. (I should point out that I was only planning to dominate my own world, but it's the principle.).

I had hoped to try my new-found skills at the final Innerleithen Enduro, but unfortunately that had to be cancelled too because there was just too much snow and the only real option would have been skiing!

So, instead, Chris and I headed up to Kinlochleven (one of the few places which werent under snow) at the last minute to stay in one of the hobbit huts at the Blackwater Hostel. We headed up on Saturday morning and managed a few hours of riding on Saturday evening and then a nice big day in the hills on Sunday. In glorious sunshine and with some fantastic views down Loch Leven, we rode some of the trails we'd raced at the Dudes of Hazard Enduro back in November as well as some new trails I've never had the nerve to try before. Well, I say we rode the trails...Chris rode them and I had a series of sketchy moments!

The temperature didn't rise much for the following weekend when I tried my hand at the Red Bull Hill Chaser. I rolled along to the city centre way too early on a Saturday morning so that I could race for less than 30 seconds. It was an eye popping 30 seconds mind you! Sadly, none of the amateur females got through the qualifiers, so there wasn't a female final race in the evening. The racing in the evening was pretty impressive though, with a motley crew of roadies racing DHers racing trials riders racing BMXers racing CXers. I've never seen such an impressive turn out at any cycling event in Scotland except the World Cup events at Fort Bill, so it was great to see.

I then managed to swap the freezing Scottish temperatures to fly out to Catalonia for a long weekend to ride int he European Singlespeed Champs. I'd never been to that part of Spain before, so had no idea what to expect, but it didn't disappoint! The trails were eminently singlespeedable with just the right amount of climbing and tech. The event itself was great with plenty of stops for food and wine and a great mix of folks from all over Europe. It looks like the Euro's next year will be in Northern Ireland, so not quite as warm and sunny, but also not as much travelling.

Since I'm still waiting for my rescheduled skills session with Dirt School, last weekend, I decided to go out on my own and play. So I headed up to the local woods and spent a few hours sessioning sections I've either been able to ride in the past or which have always stumped me. It turned out to be one of my most successful bike rides in ages although I'm not sure what the folks walking in the woods thought of a "mature" woman messing around on jumps in the woods. It was only those walkers who actually saw me do any of the stuff I was trying so I've got no proof at all that I managed anything, but I know I did! Whether I manage it again next time I go up there with the boys is another matter! Maybe that was my skilz for this year!

However, at the end of March I managed to slip a disc in my back. I wouldn't mind so much, but all I did was stand up and that was it! I couldn't straighten up or walk! Luckily I managed to get physio pretty much straight away and it's more or less fixed now. My physic has been great and hasn't once told me not to ride. His only word of warning is that if it hurts, stop ....oh, and just don't go falling off. Not such an easy task for me, but I do my best.

It has meant that there have been a few days over the last month or so I've just not been able to ride because my back's been too sore, which has been pretty miserable. However, for the first time since I started riding, I've actually been disciplined enough to stretch on a regular basis and do the exercises my physio has set me.  I've also finally started using that Yoga for Cyclists DVD's that's been gathering dust on the shelf. I won't lie and say that it's made it 100% alright, but it's been good enough that I've been able to keep riding most of the time. In fact, it's probably made me more determined to enjoy my bike and get out there and just have fun.

More physio seem to have made a difference already and I'm keeping everything crossed that it's back to normal before Friday because I've got the day off to go to my long awaited skills session and I'm then going to use my new skilz at the Perthshire Enduro on Saturday.

So, plenty of ups and downs over the last few months, but I think the ups have managed to outweigh the downs. If I promise to do lots of stretching between now and then, hopefully this weekend will be another up and my new found skilz will lead to world domination (at least of my world!).