The anticipation of adventure

Summer or no summer it seems that in ‘magazine land’ the sun always shines as the latest issues try to seduce us with stories of epic road trips taken and ultimate adventures had.  Indeed, if the twitter tales are to believed, journalists are literally tripping over each other in the remotest of locations to bring us vicarious moments of loch side sunsets savoured and classic descents negotiated, in a bid to capture the essence of true mountainbiking for those left sitting at home. 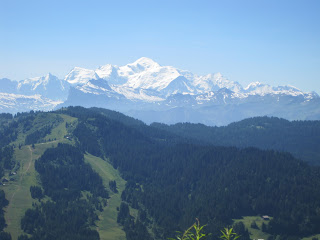 Sometimes it can feel like there’s a never ending diet of riding aspiration being served up on glossy pages, pricking at the globetrotting trip ambitions of the select few, or keeping the faith with - ‘never mind you can still find adventure in your back yard’ - features, for the people for whom austerity was a way of life long before it became popular policy parlance.

But - no matter where you sit on the spectrum of ‘adventure potential’, as mountainbikers there’s just something innate and undeniable that happens when the spirit of ‘what could be’ is ‘floated’ whether on the magazine pages or over coffee with friends. A passing thought or the kernel of an idea only needs to be batted back and forth a few times, in the moment or over a period of days through electronic wizardry, before it starts to take root and grow in minds and hearts.

Maps, guidebooks, route planners, kit lists, often these elements are seen as hurdles to get over - the planning stuff is after all just a precursor to the action part when the real adventure gets going. But to me, the faffage, rummaging for kit, ordering maps, hunting out route descriptions from long lost blog pages – these are actually some of the best bits.  Why?  Because these are the key ingredients of anticipation. 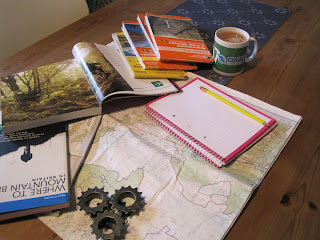 Anticipation is often relegated in the adventurers’ mind as the period before the good stuff happens. It gets demoted in the scheme of things because of course everyone knows that it is in the visceral moment of the experience itself that the real memories get burned into the cortex.  If this is you, rushing headlong into your adventure, then you might be interested to know that science has shown that the expectation of something can actually enhance and extend the memories of it, long after the event has happened. Anticipation, it turns out, isn’t delaying your path to adventure and its subsequent treasure trove of memories; it’s actually ensuring a more vivid and long lasting experience.

So, take your time planning, especially if your windows of escape are limited and your adventures are long earned, and hard won. Enjoy the anticipation of what will be, because this way the pictures and the feelings you create for yourself will have a richness and a longevity that means you won’t be needing the magazines quite as much, to keep the fire alive.

Ruthx  It's a minxy adventure!
2 comments:

The last month has been a pretty busy on with lots of new adventures.

In early May I went out to Spain for a week of riding with Ciclo Montana . Chris and I usually go out there for a week of fun, techy riding each spring, to set us up for a summer of riding, but Chris couldn't get the time off work this year. After much umming and awing, I decided to head out there on my own.

I've never been on holiday on my own before, so although I knew where I was going and I knew Mark and Jacky would take good care of me, I was pretty nervous. There would be another three people out there at the same time as me who I didn't know and I had no idea how they rode.

A brief chat with Jacky, which was meant to be reassuring, made me even more nervous because the other 3 sounded really experienced and really fit. So I convinced myself that I'd end up spending the week riding at the back on my own and maybe not having much fun.

Well, that couldn't have been further from the truth!

Nicola, Steve and Alan were really experienced, really strong riders, but they were also really keen to help me improve my riding and learn new stuff too.  Oh, and they were pretty good company too!

By the end of the week, I had found my inner monkey (apparently to tide techy stuff you need to throw monkey shapes on the bike...I laughed too at first, but it worked!) and I was riding trails faster than I've ever ridden them before and clearing trails I've never even attempted to ride before. 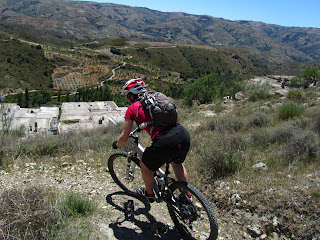 When I got home, nicely tanned and desperate to get out and try out my new found skills, Chris was only too happy to oblige. So we packed up the van and headed up to Perthshire to ride from Bridge of Tilt. It was a ride I've not done for years, but I knew there was one loose, rocky, techy, exposed descent that scared the living daylights out of me last time I tried it and I chickened out at the top. This time, it still scared the living daylights out of me, but I rode it and was smiling at the bottom.

Then last weekend, Chris and I both rode in the POC King and Queen of the Hill event which was part of the Tweedlove Festival .

We were super lucky with the weather...dry dusty trails at Glentress is almost unheard of! And there was a great turnout of almost 200 riders. 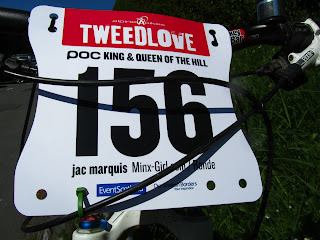 The event was a timed stage race (2 ups and 4 downs) using a combination of trail centre trails, natural trails, some fresh cut trails and some slightly cheeky trails.

My new skills stood me in good stead and I found that I was able to ride trails faster than I'd been able to ride them before and with a lot more confidence. Only 2 crashes (one when stationary with one foot on the ground and one when I  decided to take the racing line and hit a hidden tree stump and supermanned over the bars!), but given that I was riding stuff that even just a few months ago I would probably have made excuses to avoid, that's pretty good going!

We didn't manage to hang around to see the prize giving, but the e-mail I received yesterday told me that I have a plaque waiting for me to collect for placing 3rd!

So I really do need to thank Nicola, Steve, Alan and of course Marco from Ciclo, for those skills sessions!

Next adventure? Chris and I are heading over to Chamonix for a weekend in July to visit some friends and we've been talked into doing an enduro event while we're there. I'm sure those French folks will put me well and truely in my place, but it'll be quite exciting to see them ride!