Yesterday afternoon I went back to the scene of the crime and it's fair to say, it was more of a challenge than I expected.

I know I've lost a lot of fitness (and put on a bit of weight) since the crash, so I've been putting in the effort over the last few weeks to try to get some of my fitness back. Going to the gym, taking the long, hilly route home and I've even been going running a few times a week!

So, when a friend suggested a ride at Innerleithen, I figured I should give it a bash. After all, I've got over the fear and I'm feeling a bit fitter again and it was time to face that demon.

The day didn't start well....hair appointment in the morning went well until they ran out of hot water mid-shampoo. So I was later than I had planned setting off to Innerleithen. Quick text to say I'm running late, but on my way. Then the road was closed and there was a big diversion. Second text to say I'd be quite a bit late now.

I eventually arrived feeling a bit stressed and surprisingly anxious!

We set off up the hill and almost straight away I started to feel a bit overwhelmed. I knew I should be able to ride at this pace, but I was really struggling. I was getting myself into a bit of a tizz and the more I tried to stay calm, the more nervous I was getting.

I knew it was ridiculous, but I realised I was going to have to face this demon on my own. So, a few deep breaths, slightly teary eyed, I made my apologies and set off on my own. A few minutes later and Chris caught me up...he knew how nervous I was so decided to ride with me...just to make sure.

The climb up to Minch Moor was tough. I kept plodding at my own pace, but I was in a much more noodly gear than I would usually be. I decided not to take the short cut and to keep pushing on up to the top, just to prove to myself that I could. The descent from the top, which is usually a super quick, whoopy ride was a bit more subdued than usual, but as I rode, my confidence started to grow a bit and I decided not to take the chicken run around the rocky drops.

I made the first one, went a bit faster off the second one, then let go of the brakes all together on the third. By the time I caught up with Chris at the next marker post, I was starting to grin.

There was a bit of a diversion because of logging work, so Chris suggested we go a slightly different way. After a few minutes I was totally lost, until we popped out on a fire break at the top of the downhill runs. Chris had planned this all along so that I'd have to ride some of the more techy trails and test myself.

We agreed that I'd just see Chris down at the next fire road so that I could mince down at my own pace.

I watched Chris head off down the trail and felt the nerves build up again.

Deep breath. I've done this before. I know I can do this. Another deep breath, then I set off after Chris.

I had to give myself a bit of a talking to, but I managed not to do any panic braking and made it down to the fire road in one piece.

Did I want to do the next bit?

This time I managed to keep Chris in sight, so I must have been going a bit faster. There was a bit of an incident with a tree, but I made it again and wasn't feeling nervous any more.

Then we were on to the last bit of trail back down to the car park. I'd made it and I'd faced the demon of the crash site.

It was an incredibly frustrating ride because it was clear that I'm not as fit as I was and it was more of a challenge than it should have been, but I proved to myself that I can still ride the scary stuff (okay, so I rode it slowly, but I rode it!).

It'll be a wee while before I'm back to where I was before the crash, but at least now I know I can still do it.

I just need to decide now whether to sign up for the enduro at Innerleithen next weekend..... 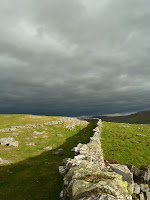 Regular readers will remember the guest post from Lesley back in August, and her start back to cycling fitness after a diagnosis of (and subsequently successful treatment for), breast cancer. Well, an update email popped into the inbox from her, and it seems a landmark has been reached...

I’ve just got back from a long weekend in the Yorkshire Dales with Rich and as I ride into work my legs still scream whenever I threaten to actually put some effort in, needless to say it was a brilliant weekend.


The weather forecast was not a pleasant one, but since breast cancer earlier this year my attitude to weather has somewhat changed. Whilst packing for the weekend I just couldn’t decide which bike to take – road or mountain? Due to the surgery I’ve had I’ve only ridden on the road so far and have been itching to get back on my mountain bike but I know my fitness isn’t what it used to be and my upper body strength is considerably weaker. However, the mountain bike won and with it packed in the van I knew exactly which ride we were going to do.


Back to this time last year, along with a group of friends, we rode a superb route in the Dales from Ingleton. Everything was perfect, the sky was blue and clear, the sun was up there, the air was crisp, the scenery simply beautiful, the trails quiet and the company good. You know, one of those rides that stays with you long after you’re back home. As it happens, due to last winter’s weather and my ‘unfortunate’ start to this year that ride was the last decent off road ride I did. Now I’m not sure why, perhaps it’s something to do with starting where I left off but as the months of my recovery have gone by I have become slightly obsessed with doing it again.


Well last weekend that’s exactly what I did.


The wild and windy weather was ‘challenging’, meaning a few hills had to be pedalled down as well as a few hills pushed up, but I soaked up every minute just incredibly happy to be there again. And as I rode out of the Clapham tunnels, knowing that the end was only a few miles along the lane I was grinning like an idiot.


I’d done it, I’m back where I want to be and I can’t tell you how good that feels. 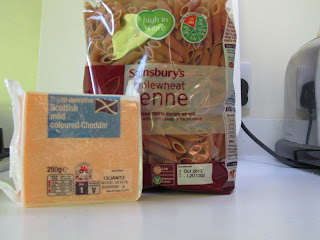 I've now had almost three months off the bike following my ungracious crash back in October - I did sneak a few rides in early on, but got a stern telling off from my doc who told me not to ride until I stopped getting headaches, dizzy spells and wobbling....that took until late December! Then, would you believe, I got a stinking chest infection!.

Over the last few weeks, I've been out for a few rides and I've really struggled. Although I'd managed to do a few, quite dull, turbo sessions since October, not being on the bike for such a long time really meant that I'd lost an awful lot of fitness and the chest infection left me wheezing and coughing. So rides where I should have been blasting along having great fun, were hard work and a wee bit depressing to be honest. Struggling to keep up, toiling up hills and just feeling like I've got no strength in my legs at all and wheezing away like an old woman.

I know I'm no Gunn-Rita, but it shouldn't be this tough!

And to make matters worse, I've got the fear! Descents I usually love are making me nervous, which is not good!

So, on New Year's Eve, I decided I needed to get out and do a fun ride at a leisurely pace, so I suggested a local ride on some trails around town, mixing up some rooty stuff, quick stuff, some practice on drops and jumps I know I can do...just to remind myself that I can ride a bike.

Well, the climb out of town wasn't exactly a breeze, but it wasn't as tough as when I did it a few weeks ago. Then I rode the steps I'd wimped out of a few weeks ago when the fear took hold. Then I made it up that short sharp climb. Up that long slog and managed to keep chatting. Then we were at the highest point....it wasn't as bad as I expected.

Then for the fun rooty descent....managed to hang on to Chris' wheel, just, so I must have been going at a good pace. Jumped those few drops...still on Chris' wheel. Leaned into those greasy corners and didn't panic when the bike wobbled under me...just dabbed and pushed on.

And I'm smiling and giggling!

Rode the steps...and the next, steeper, ones (opted out of riding the concrete steps of doom, but I wouldn't usually ride them anyhow).

It's all starting to come together. Now that I'm having fun, I'm starting to go a bit quicker too and keeping up with Chris, just.

I've got lots of bike plans for this year, so, I think I need a few more macaroni cheese rides of just having fun and messing about and then hopefully, I'll be back to my old self and maybe some of that fun will get my legs back into shape too!