It Must Be Time for Cross

I'm not sure what it's like further south, but up here in Scotland, the leaves have well and truly turned and they're starting to lie in nice crisp piles on the trails. The chessies are falling off the trees ready for collecting.

It's just a tad too cold to leave the house in the morning without armwarmers (and a spare base layer just in case). And chat has moved from big rides out in the hills to cross.

So I've had to dust off my cross skills over the last few weeks and remember how to forget that it's a tad scary hurtling down a hill on drops with brakes that just might not stop you in time before you hit that tree. But oh, it' fast and it's fun!

The first race in the SCX series is next Sunday and I'm hoping to see a few new girly faces on the start line this year. I can't guarantee the weather, but I can guarantee it'll be fast and furious, muddy and cold and it'll hurt. There might even be tears, but we'll love it! 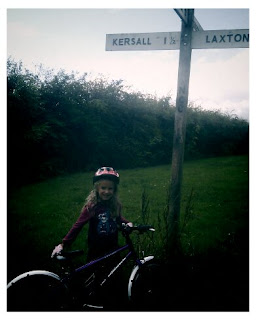 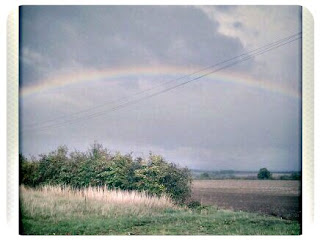 We set off home through heavy showers (cue choruses of all the rain-related songs we know) and then saw the most spectacular rainbow (more songs) and finally we got back for well-earned tea and cake. I didn't let on that this is one of the biggest rides I've done in weeks. Oops. Must Ride More.
1 comment: 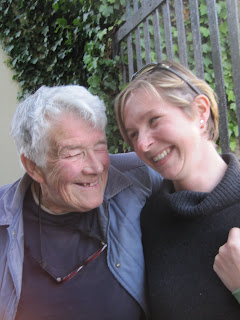 Today the first of the Cycletta sportives takes place. I'm a bit gutted that I can't be there because no matter what theories I read about the usefulness of women-only events, my own experience is that women gain in confidence when they ride together and I'd love to see how it goes. Happily, two Minx girls, Jayne and Amy won places to ride and are going to report back. Catch up with Jayne over at her blog, and read Amy's winning entry and thoughts leading up to today. That's her left, introducing her daughter to the joy of mountain biking.
"I am itching to play on wheels!Mountain biking holidays, daily shop, getting to work – before Baby girl my bicycle was my only mode of transport; even when 6 months pregnant I commuted 20 miles a day in London rush hour, singing Mama Cass to my bump. Baby girl has her own seat on my bike and loves going on adventures, but I don't get the chance to go on adventures of my own in quite the same way. Space and time to myself would be amazing. Other people choose spas and makeovers, but to reconnect with 'me' and make me feel oh-so-very-free I need only one thought in my mind: keep the wheels turning."
"Well, so much for my summer of training! The promise of getting out on my bike sans baby every Monday was swiftly brushed aside by the humdrum of everyday existence. Even getting in the saddle with baby hasn't happened since a jolly to Dulwich Park at the start of summer with daddy and baby in tow."
"Now with less than a week to go, I am feeling under prepared for the 40k ride organised by Cycletta. I am, however, incredibly excited and looking forward to the scenery and the feeling of freedom as I pedal around the circuit. No baby, no work, no mobile phone (well, in my bag, just in case!)...it’s going to be bliss!"
"Is this it??? It this the end of summer? Trying to get set for a ride today made me feel like winter is upon us. We didn't go far, but just enjoyed being in the saddle. Indigo loves cycling - she throws her arms in the air when we go fast down hills and sometimes puts her hands back so that with each rotation her little puddies hit your knees. This results in no end of giggles."
No comments: