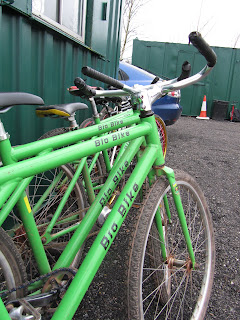 Last Saturday morning 11 hardy souls gathered to celebrate a friend's birthday at the Gin Pit...no, not some dodgy illegal drinking den, but the Astley and Tyldesley Cycle Speedway track.

I had never even watched cycle speedway until the birthday boy forwarded on a you tube clip of the world championships....aside from looking a bit like wacky races, it looked like it might hurt. I figured the full face helmet might be overkill though.

We were the first to arrive at a very frozen and icy track. To keep warm whilst we waited for the others to arrive we volunteered to help clear the ice off the track...it didn't really help that much. It was freezing!

Soon everyone arrived and our commissaire for the day set about telling us how it works. 4 laps round a very short course...how hard can that be? Only 5 races? Surely that's only a few minutes of racing over the whole day. Sounded like a much easier option than cyclocross or cross country!

I was picked as one of the first riders to line up on the start line with three others(including 2 children a fraction of my age and size, but a lot more experienced at cycle speedway than me). The gate went up and I quickly realised that 4 laps round a short course might just hurt!

Cut up on the first corner by a small child. Much sqeaking by me as I tried to avoid crashing straight in to him. Much goading by the crowd for being chicken. Nearly wiped out on the second corner. Cut up again on third corner. Try not to ride over small child (I'm sure it wouldn't be good form). Foot out to help drift round the fourth and fifth corners. Bit more speed. Very sketchy sixth corner. Shut my eyes on the seventh corner. Fail miserably to catch the children and come in dead last! 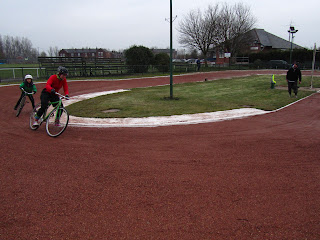 My day kind of continued in the same vein. Beaten into a pulp by children, frightening myself by drifting wildly round corners and nearly riding into other riders. But everyone else was sufferingthe same fate at the hands of the children.

Given our overall incompetence, the commissaire, decided that the children should have their own final and we could fight it out amongst ourselves.

That's when it got nasty!

For a bunch of friends, we gave no quarter. Elbows out. Cutting eachother up. Even some pushing out of the way (yes, you know who you are!)

I made it into the "not quite the slowest" final and decided to try the dirty tricks like the children did and it paid off. Cutting up the last rider at the first corner and managing to keep him just behind me from then on in meant I didn't finish DFL. 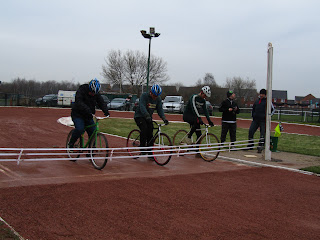 Despite the cold, the humiliation at the hands of children and the mouth full of red grit from the track, a fun day was had by all. About the best day's racing we've had in a long time!

Is cycle speedway the next thing to have a bash at?