How do you know when it's finally time to say goodbye to your favourite old shorts?

Is it when the stitching frays a bit along the seems? No. They're still hanging together. It'll be fine.

Is it when the chamois starts to get a bit lumpy? Nah. It's just molded to the shape of your bottom. It's not chaffing, so it's still fine.

Is it when you notice a slightly thinning patch on your inner thigh where your thigh rubs against the saddle? Oh no. That's just aero-dynamics...less resistance at your inner thigh.

Is it when you make a speedy dismount, desperately trying not to go pelting into the stream, but manage to catch that slightly thinning patch on your saddle, wobble and tumble a bit and hear that unmistakable sound of ripping lycra? Yes. It's probably time now. 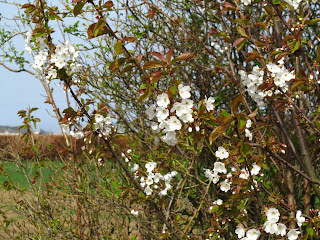 I've not been able to get out riding all week, so this morning's blue skies and tweety birds were all it took for me to decide to ride out to visit my Dad rather than drive....well, that and a quick pedal change (we seem to be down a pair of pedals at the moment, so there's a rotation system going on), some indecision about whether or not to be brave enough not to wear winter kit, opting for a compromise of roubaix 3/4's, base layer, jersey, arm warmers and gillet rather than winter jacket and then I was off.

20 minutes later, my foot came out the pedal suddenly...or at least I thought it came out of my pedal. When I looked down, I saw that the pedal was attached to my foot, but not to the crank. Ahem...maybe I didn't put it on quite tightly enough, but luckily nobody saw me go a bit pink with embarrassment and I quickly put it right and got back on my way.

Within another 20 minutes, I was by the seaside and breathing in salty, seaweedy air and heading down the coast under big blue skies. Although it's only April, the beaches were crammed with people (admittedly they were all huddling near the carparks behind wind breaks and wearing lots of clothes, but they were at the seaside). 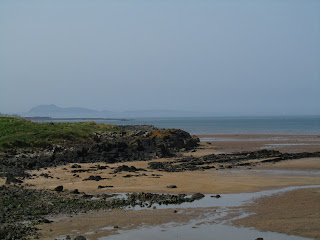 The coast road's always pretty windy, so my plan was to ride out along the flat, but windy, coast road and return by the less windy but quite lumpy inland road. I was relieved to turn off the busy coast road out of the wind and start heading cross country on peaceful little roads.

I managed to spot lots of pheasants, lambs, cabbage fields (which smell quite strong), a hare and a dinosaur. I really did spot a dinosaur... 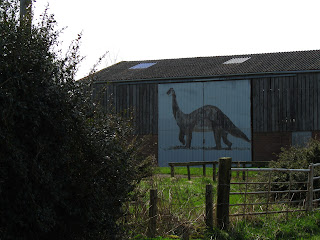 I stopped off at my Dad's for some lunch and cake (and a bit of oohing and ahing at the fact that I rode over the big hill from the coast road) before heading off for the return leg. By this time it had actually started to get a little bit warm but I wasn't quite brave enough to take my arm warmers off. I think I had a bit of a glow going on though.

I decided to go for a bit of a randomeer and took a left onto a very small road which was deserted but turned out to have some brand new tarmac on it, so I felt very spoiled....traffic free road and not a single pot hole to be seen. The road was so quiet, it felt like I'd stepped back in time and the road signs only made the feeling stronger....when do you last remember seeing a sign telling you were 1 and 5/8 miles from a town?

Although having the roads to myself was bliss, my randomeering did add a few extra miles onto my ride, as I discovered when I realised my gas tank was empty and I hadn't brought any food with me and there was still 10 miles left to go. Luckily there was milkshake and Portuguese potatoes waiting when I got home.

Fingers crossed tomorrow's just as lovely as today and I might even be brave enough to wear shorts rather than roubaix 3/4....maybe. I'll definitely take some food though.