What is it about walking?

I am learning to be patient with my knee. On the wise advice of a friend I'm not getting frustrated by the hills I have to either avoid or walk (I'm not allowed to ride anything that requires me stand on the pedals), and instead making the most of the swoopy corners and briefly sunny trails that I can ride. I've gone back to the pool and am loving swimming early morning laps and that lovely feeling you get when you minutely adjust the angle of your hand and immediately go faster for no extra effort. I know it makes me strange, but I don't get bored with counting tiles. And in the absence of allowed running but the need to get out of the house when I probably shouldn't be forcing the knee through more rotations for a second day in a row, I've even been (whisper it), walking.
I can't deny that I have enjoyed the ease that comes with just grabbing a jacket and being out of the door in ten seconds flat. I have loved getting reacquainted with the contents of my Shuffle (I know some people listen and ride - I can't), tracks from compilations dear to my heart, old favourites, sentimental stuff. (We shall not speak of the spontaneous dancing....) It's even been fun striding through the rain. But despite all of this, and even though seeing an hour's window of opportunity this evening I dashed out with what felt like enthusiasm, I reckon that I still really really don't like walking. Can anyone explain?
Minx
1 comment:

Been a bad few weeks and my legs are twitching, not in a good way.

On the face of it starting a "proper" job that entailed being in an office 9-5 , 5 days a week didnt seem so bad. Until that is I realised quite how much riding I used to squeeze in when I "worked from home"...

Having crashed & burned quite badly on my first sprint race of the season I realised something creative had to be done.

Until its light enough for me to actually want to get up at 5am and cycle from Crowthorne to Old Street where I work then my chosen mode of commutership is a season ticket and a Dahon Curve folding bike...

I'm a girl... colour is very important and lets face it for £3oo there isnt going to be much of a "spec" to get excited about!

So now my days in the office are punctuated by two time trials trying to shave seconds off my commute at either end of the train journey without getting squished by a taxi, bus or white van man... although i have hit two pedestrians who just stepped onto the cycle path either not looking or not quite appreciating the speed one can get up to in top gear on a folder...and i get to spend a good 10 minutes a day practising track stands.... which are really not easy on a fold up bike. I always thought I would hate to commute to London everyday & when i thought i'd like to be able to ride everyday, this wasnt quite what I had in mind. But when I throw my leg over the two spindley stalks that pass for a stem and a seat post at 7am every morning I actually smile...

I did a LDWA (Long Distance Walk Association) Challenge today, the 18 mile Two Crosses event. As part of my marathon training I entered as a runner, not a walker, but seriously these LDWA types could lure me into abandoning running shoes or bike wheels in favour of some good old fashioned red socks and leather boots. They truly know how to lay on a good do! The first check point had a marquee, containing a buffet, more sandwiches, cake, jelly, hot soup, pies, biscuits and sweets than I knew what to do with. Further round the route another checkpoint had salted nuts and a selection of alcoholic beverages. The wobbily navigation following the wee dram of scotch was purely coincidental! Upon completion there was even more food and gallons of hot tea. Might be the only time I run 18 miles and end up in calorie credit.
If you fancy doing something different to your usual weekend activities and are looking for a way to have a fun and challenging day in the hills you could do a lot worse than look up your local LDWA and eat your way round a few miles of countryside.
Vikki
No comments:

Two substantial things have happened since I last blogged. Firstly, I went to Sierra Nevada for a week of gravity-loving, cactus-dodging, boulder-grazing madness. I can't describe the exhilaration of taking to the network of 'Danger-of-Death' rides, including the Extreme Towpath and Elephants Tail each morning after a three course breakfast.

It could actually be described as more of an eating holiday punctuated with cycling breaks. The food was amazing! And i learnt to ride steep twisting steps as we plunged down the mountainsides through little white villages desperately clutching to the (often sliding) landscape.

The other event of note was a wee running race I took part in on Friday night, starting just before midnight. You may have seen the news about Sir Ran Fiennes crashing his car in Stockport on Saturday lunchtime? Well he did the same race as me. The High Peak Marathon - 44 miles of bog, snow, mountains, rocks, icy flagstones, home made flapjack, luke warm hot chocolate and a sun rise that turned the snowy Pennine Way slate grey then bluebird blue.

Because we like drama, we settled on a sprint finish with another mixed team to squeeze in under the coveted 11 hour mark (by 9 seconds!) leaving them stranded another 19 seconds after...

What remained of the weekend was an interesting mix of mashed potato, sausages and gravy, sliding down handrails to ease the searing pain in my quads and making plans for next year (to go nearer 10 hours, obviously!)

A snowy Kinder Scout at dawn. If you haven't seen it, make a plan...
4 comments:

Cheated by the weather forecast, we struck forth for the Dales regardless. Friends of easy company, skinny tyres and grubby bar tape, a brace of tea stops and just enough climbing to stay warm. Well, I thought so, anyway. 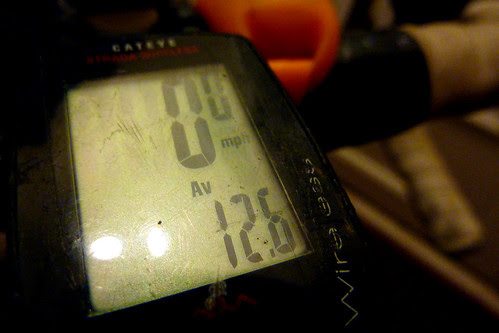 Bimbling home alone at dusk (the friends living on the other side of a substantial hill) there are curlews looping over the fields and the sort of light which hints at summer evenings to come whilst sending you deeper into your collar. It's not been a fast 70 miles but that doesn't matter, not at all; a lazy average means more time for catching up and being cheerful, feeling lucky and loved in equal measure, more time for coffee and cake, the things that sometimes matter and mean more than going fast.