Some mo but not quite jo yet 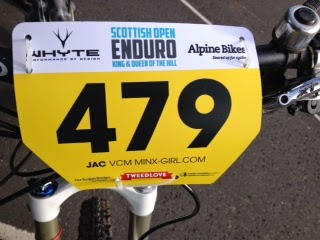 I did it! Last weekend I got a race head on again for the first time since my crash last year.

Of course when I say I got a race head on, I mean a race head in my own way….not really racing, just pushing myself out of my comfort zone, and last weekend I reached the very limits of that comfort zone (and went a wee bit beyond).

I had missed the boat for entries to the Tweedlove Enduro, so haven't been doing much of that type of riding - mostly because it's that kind of riding that got me into trouble last summer. I had put my name on the reserve list, not really expecting to get an entry, but about a month ago, I got an e-mail telling me that someone had dropped out, so I had an entry.

Between getting that e-mail and last weekend, I had to remind myself what this enduro riding thing's all about and made myself practice some of those steep, rooty, muddy trails that are such a feature in Tweed Valley enduros. Those practice rides were a mixed success…I built up an interesting range of new bruises of all shades and shapes, put some big dents in some big trees, added some extra layers to my knee pads with the mud I picked up on the way down (that's the way down onto the ground, not the way down the trails) and managed to put a real dent in my confidence. But despite all of that, I did manage to ride some sections of trail I had never managed to clear before and I did finish most of those rides with a grin on my face. 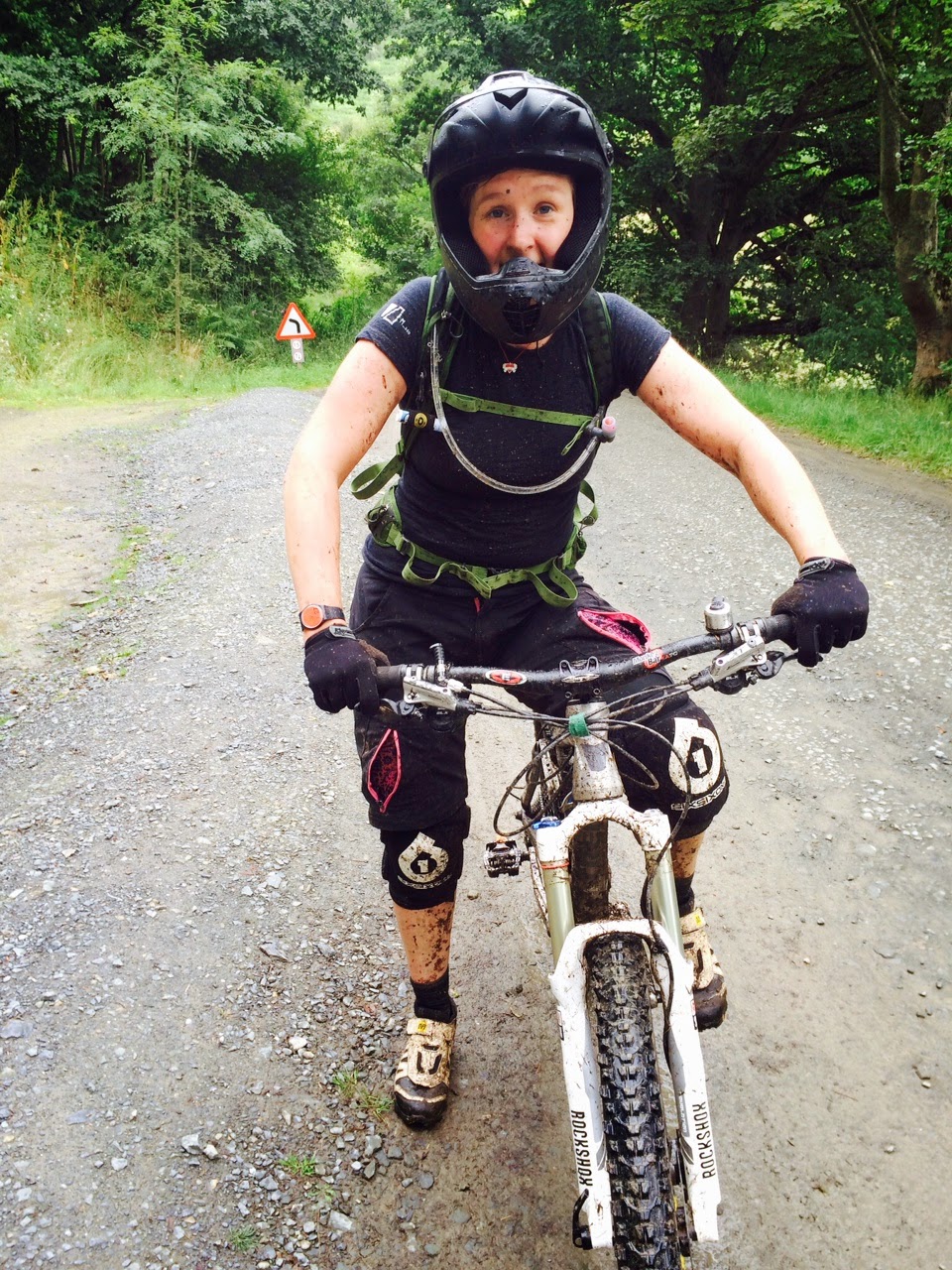 A month isn't long though and last Saturday rolled around before I'd really managed to remind myself how to ride enduro or convince myself that I could still do it.

Anyway, I had an entry, so decided to woman up and get on with it and on Saturday morning I signed on, picked up my race number, dibber, course map and start time and headed out for some practice.

The race was made up of 4 timed runs. 2 at Glentress using a combination of the trail centre stuff, some of the trails used for the Enduro World Series race earlier this year and some other off piste stuff thrown in for good measure. The other 2 trails were on the other side of town in Cademuir forest - these were the big unknown for me, so that's where I headed first for practice.

After a pretty stiff climb, push and hike to the top of the forrest I got to the top of the first run along with another dozen or so riders. I knew most of the other riders there, which would usually put me at ease about riding new trails, but on Saturday, it just made me more nervous, so I waited until they'd all set off before I made a start.

I was all over the place! I was pin-balling from tree to tree, crashing on every corner if I even managed to stay on my bike as far as the corner, and just too terrified of crashing to even try riding any of the fall line descents. I even had to take a few moments part way down to pull myself together, calm myself down and stop myself from losing it all together. I had to walk almost the entire trail.

Pushing back up to the start of stage 2, I didn't hold out much hope. I knew stage 2 was an old downhill course, so likely to be steeper and techier than stage 1. When I got to the top, I saw some other familiar faces…Crawford Carrick-Anderson, Chris Ball and Andy Barlow. My heart sank! Not only was I having a rubbish ride, I was going to have to slip, slide and crash my way down with these guys practicing and watching. I just had to get on with it and with a thumbs up from Crawford, I got going.

I slipped and slid, but no crashes this time and I got down to the bottom on my bike this time rather than on foot.

I decided that was enough practice though. My confidence was pretty low and I wasn't sure if I would race after all, so headed home to clean my bike, get some food and figure out what I wanted to do.

I decided to see if some of my usual pre-race rituals would help calm me down, so painted my nails with some "enduro specific" nail polish… I'm not sure it helped, but the ritual made me focus on something other than my nerves. When I woke up on Sunday morning I decided to give it a go, but I've never been so terrified about a race before. I was so nervous that I'd crash and end up with another head injury that I couldn't eat much breakfast.

To make matters worse when I arrived in Peebles and got my stuff out of the back of the van, the water in my pack had leaked all over my kit, so everything was soaking wet.

Not a great start!

Luckily, I didn't have much time to hang around though, so got myself ready and rolled round to the start, joined the queue and when my start time came round, was announced (getting a plug for Minx-Girl in the process), rode down the start ramp and was off.

My mind was racing with doubts...I really couldn't afford to have another proper crash, but I also couldn't walk down the trail like I had on Saturday.

When I got to the front of the queue at the start of the first stage, I didn't have much time to think though. Chris went off just before me, the marshal counted down, told me I could go when I was ready, I dibbed and was off.

I made it round the corner I'd crashed on, made it down the steep bit, got to the bit I'd had to start walking and kept on riding. Caught up with a rider and passed him, caught up with another rider and was just about to pass him when I had a little over the bars. Jumped back up, onto the bike and kept going.

I didn't ride the trail quite like I would have done a year ago, but I rode it and made it down in one piece…and actually had fun!

After that, things just got better. I wasn't fast or particularly smooth but I rode everything, really enjoyed myself and finished with a big grin on my face. The whole vibe of the day was great and the support from organiser, spectators and fellow riders really helped make it a fun day out on the bike rather than just a race.

Not only was it my first post crash race, it's the first race I've done in the slightly older ladies category too. I've not quite accepted that I'm a vet yet, but at the prize giving, when my name was called out as 3rd place female vet, I had to accept it pretty quickly or miss out on that podium!

I might not have been as quick as I used to be and I made a lot more mistakes than I would have before because I'm so out of practice, but the risk of  pushing myself out of that comfort zone paid off and I had a great day and managed to get some confidence back (along with some more new bruises). I don't think I could say that I've got my mo-jo back, but I might just have got my mo back and that's pretty good as far as I'm concerned. 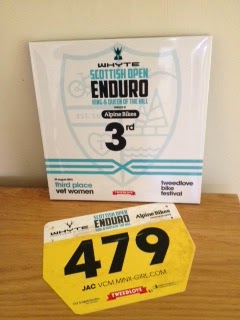