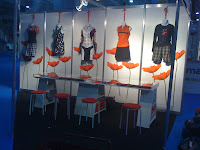 Things are just about getting back to normal after the Cycle Show now and my brain is unscrambling stuff and gradually reassembling it into cogent thoughts. Well mostly.
To anyone that spoke to me in the weeks leading up to it, it will come as no surprise to know that I was (putting a mildly) a bit nervous. I thought I was taking Jenn along for solidarity but as she arrived to help me finish loading the van she confessed to being a tad shaky herself. Honestly, you'd think you could depend on someone that's braved bears and ridden 48 hours straight for the last part of the GDR. But no. It's true, you really can't get the staff.
I've done a ton of shows before in corporate life, but this was a first for Minx and it felt like playing with the grown ups. When on of our regular customers said she loved the idea Minx was going, but actually didn't like the idea that everyone else would now know about us, because we were 'hers', I felt like rushing back to the safety of her apron strings and hanging on for dear life.... I've always had the utmost faith in what Minx was set up to do, but it isn't mainstream and Earls Court is a big stage. I always swore we would never do it unless I could do it well, and truthfully the budget meant we were flying more on imagination and love than slick 'retail as art' installation.
We felt pretty smug when our late departure from Wiltshire meant we breezed into the unloading dock. Less smug when our 'two hours to throw it all together' turned into four. There was also a dodgy moment when the Ikea flatpack stools turned out to need the one tool we hadn't packed and it looked like we were going to have to ask a boy for a loaner (insert joke here). Frantic rummaging turned up the emergency Crank Brothers 17 that always gets chucked in and our collective honour was saved. With four minutes to go until the lights went out we were slapping on poppy stickers with increasingly careless placement when a passing comment was shouted. "That's the best stand in the show!" I nearly cried. Especially when it turned out to be the Creative Director that shouted it.
From the moment the doors opened the next morning it was a whirl. We had our moment in the press sun after an interview with the Guardian. Not to mention possibly the worst few minutes of my life, a video interview with Singletrack. I could go on forever, we had a ball, I was sorry when it was all over because I was enjoying riding my bike around London, talking cycle clothing and meeting so many really really lovely people. There was some serious stuff, some conversations that got me pondering - and not all in a good way. But that's for later. A 'state of the nation address' as Jenn would say. For now, here are my best bits:
I will probably keep sneaking back to add to this list, but I have to press 'publish' at some point. Seriously, we had such a blast - my thanks to everyone that came to talk to us and supported us, but most of all my thanks to Jenn. Turns out it was only a tiny bit scarier than bears after all.
Minx
4 comments:

last week we were in london (of which, more later). the week before that i was in france with the trans provence crew reprising one of the better bits of last year.

t-p is a point to point enduro event that mixes steady-away linking stages with some of the most mind-blowing high mountain riding i've ever experienced. i've never touched anything in the uk which can even remotely prepare you for the riding here; for singletrack which goes on for so long you start to wonder if you're dreaming (and later on still have time to pinch yourself), which packs in so much rocky, droppy, swoopy goodness that all you can do when you get to the bottom is giggle and grin like a clown.

the highs and lows of a total immersion event like this are pronounced. arriving tired and sick after a tough few weeks of stuff back home there was some fretting about how well i would cope with the job in hand. pre-riding stages, keeping in front of the racers and gathering them up at the end of each leg with a minimum of grumpiness despite very long days and the occasional logistical hiccup. not to mention a level of technicality which would have me grazing the edges of my skill daily and cause its fair share of spills for everybody.

still though, we pulled it off. good folks and plentiful laughter once again saved the day. there is something about the mixture of beautiful high mountains, warm (ish) sunshine and friends who know when to feed you chocolate and when to just shut up and ride, that makes life better. even when you're flying home too soon. 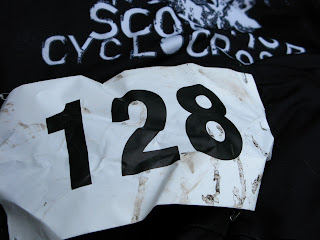 Today was my first cross race of the season.

Although I've been riding my cross bike a lot over the past few weeks, trying to sharpen up my skills and remind my legs that they need to work a bit between now and Christmas, I knew it was going to be a tough 'un.

After the increase in rider numbers in the Scottish Cyclocross Series last year, we had to make the decision to split the races, so the women now race with the Juniors and Vets rather than one big race for all categories. We've got some pretty gnarly Vets racing at the moment, so the pace of our race isn't much less frenetic than the senior mens race. There were over 70 riders in our race, including 15 women, so it was going to be a busy race.

The race started a bit slower than expected because of the number of riders trying to get rolling, but I managed to squeeze my way past some of the juniors and vets who were gridded in front of us girls. Then everything came to a clattering halt...there was a big pile up of 7 or 8 riders with bikes and legs and arms everywhere. I had a momentary dilemma over whether to stop and help the riders who were down, but I had an unusual surge of red mist (which I very rarely get) and found myself stepping over frames and wheels and jumping back on my bike to get going again. I'm still not sure if I feel guilty about it or not.

The rest of the race was great! The pace was fast...much faster than the last cross race I did. I knew there were a couple of girls in front of me who had managed to get through the pile up at the start before I had made up my mind not to help (yes, I do feel guilty now) and I knew I'd really struggle to catch them, so I decided just to make sure I didn't drop any places.

The laps were long and really mixed...straight, fast, hardpacked sections to hammer along (bunnyhopping the speedbumps); rooty, slippery singletrack through the trees; long, draggy climbs which were tougher than they looked (but they did let me pick off a few riders and get slightly further up the field); the run up which was really more of a clamber up with bike over shoulder; then the fast and furious descents. All that and not a second to catch my breath.

It was great and it was great to see all the familiar faces again and all those grins at the finish line. It was also great to be racing cross again after taking last year off from cross racing...it's cold, it's muddy, it's wet and it's blinking tough, but I love it!

Unfortunately I'm going to miss the next three races in the series because Chris and I are off to the Singlespeed Worlds in New Zealand on Friday. I think the chance to ride some new trails somewhere completely different and having some adventures along the way might make up for missing a few cross races...maybe. I'll let you know.