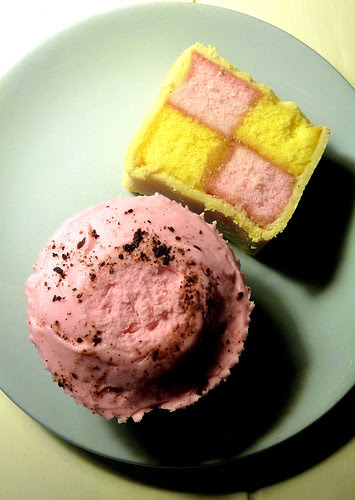 who needs enemies when you have friends who will take you out on a 'rolling' 3 hour road ride in the first spring storm of the year and then send you home with red velvet cupcakes for tea? 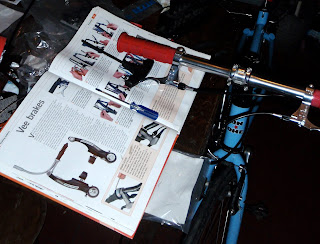 The book said 30 minutes and 3 spanners worth of difficulty. 3 days and 3 bike shop visits later to buy various missing or mangled bits and the task is complete. The sense of satisfaction as I successfully test rode up and down the street........... priceless.
Vikki
5 comments: 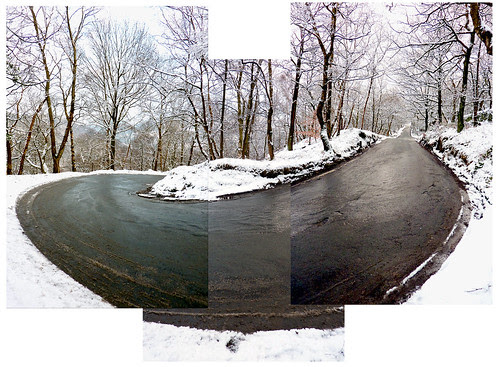 i'm sure i've written before about not being a natural climber, but just to recap: i'm not one.

however, i've been living in the land of ups and downs for a year now and something has changed.

partly through necessity: the only flat road for miles around is the valley road and in its usual traffic-choked, pothole-ridden state it's just not a very nice place to be. so the options are up, and then down, repeating as required.

and i've found myself coming around to climbing.

the rhythm is there, the ability to spin, to tune the noise out, all things i was lacking which have flourished im their new habitat. there are a few places i've not yet dared to go on my standard double: mytholm steeps is one of them (and as matt said, it's been magicaly de-steepened in that picture). i figure that any road steep enough to scare you all the way down it should definitely be avoided all the way up. however, i am feeling strong(ish). i put in a nottooshabby time on cragg vale last week with all sorts of excuses to convince me it could have been better and i think the time has come to see just what these legs can do.

once the snow melts, anyway.

This little Minx is going to Sierra Nevada tomorrow morning for a week of dry dusty trails, swimming in the pool, chatting with mates and running in the mountains.

Just been for a very muddy run through the woods. It has started raining now. I am very cold. I am very much looking forward to some sunshine!

They only slept a few hours in 7 days. They trekked, mountain biked (at one point 13.5hrs non stop), the kayaked in freezing seas, trudged over mountains thigh-deep in snow. They swam across a freezing river, towing their kit. They worked well together, bit the bullet, dug deep.

They are the first team in history to win two editions of the Patagonian Expedition Adventure Race two years in a row.

They are now sleeping and eating, safe and sound, at the end of the world in Chilean Patagonia, swapping stories of their heroics with the other teams who trailed in their wake.

I am so proud. 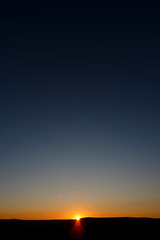 but it's still not quite as warm as it looks. yet.

My boyfriend is racing for Team Helly Hansen Prunesco in Patagonia in the 10 day non-stop multi-sport expedition adventure race. They'll be trekking, mountain biking, kayaking, climbing and other stuff like coasteering and obviously navigating themselves through the wilds of Patagonia. There are 6 checkpoints in 10 days. They'll barely sleep during the race and return to England a battered over-exhausted mess of broken bodies and adrenalin-fuelled sleeplessness.

Last year they won the race in 6 days. Will they do it again?

I am, needless to say, a nervous wreck. I am on twitter (I had to learn how to use it) constantly to check their progress (currently second). It is so exciting.

Adventure racing is so much fun... www.patagonianexpeditionrace.com

Come on The Prunes!
No comments:

Last Sunday was the last of the Brass Monkeys winter Enduro series and the first time I have actually had a roast dinner during a race!
The event series was organised by Gorrick & The Army Cycling Union and sponsored by Merida. Riders had to compete in all 3 events to qualify for the series points and each event was about a month apart. The courses were all in new locations and the trails were a good combination of short sharp & interesting and technical enough to be an advantage to local riders. Round 1 was a freezing monsoon of sideways eardrum piercing sleet, Round 2 was bright, cold and very icy and the final round was sunny day, perfect trails and lots of smiles.

Round 1, at Rushmoor Arena, was just a war of attrition and only the really stubborn or stupid survived. Post bike maintenance was quite painful on the wallet & I took out a razor blade thin brake pad backing and threw away a nearly new chain. 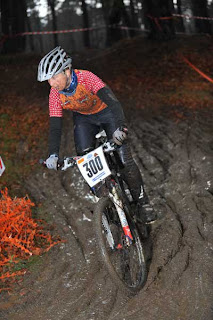 So having entered the first one in the 4 hour solo class meant I then had to do the other 2 in the same class….pants…. I nearly froze my butt off on the first round and was still so cold by the time I got to the pub that I had to hold my pint with both hands!
So I was quite looking forward to Round 2 at Ash Ranges waking up to brilliant sunshine on the 28th December. A fast rolling course along with the new set of rubbers I got for Christmas and I did get a bit cocky on one particularly icy corner and slapped a knee down onto a frozen ground with a wincing thwack.

In between Round 2 & 3 I contracted the obligatory winter girl flu (much worse than man flu, we just don’t go on about it) and wasn’t sure I was even going to be able to ride. A couple of menthol inhalations and a really good blow later and I was talking about just doing the one lap to qualify for the points to get 2nd in the series. I had never ridden Parkhurst Hill before and it was a really great trail, lots of climbs to ensure I hacked up the remaining lung and some tail twitching descents to make sure I didn’t fall asleep.
Sadly the lungs were not happy to convey the oxygen to the legs as they usually do so I just did the two laps. Stopped and chatted to a few friends along the way and then went to the pub for Sunday lunch and a pint and got back just in time for the presentations to pick up my 2nd place series trophy! Now THAT is the future of racing for me…… 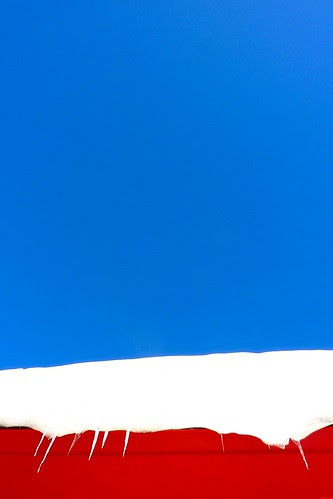 back in the USA.

working this time, in international falls, minnesota. they call their town "the icebox of the nation" with good reason. coldest place i've ever been and so dry the snot freezes in your nose before it gets a chance to run.

a) coming home with a fatback
b) planning too many long holidays (thus far discussions have covered the ultimate snow race roadtrip [arrowhead, susitna and iti all fall conveniently close to one another], ctr, td and raam).