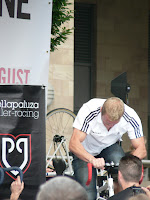 Chris Hoy on the Rollapaluza, setting the target time of 19 seconds for 500m. 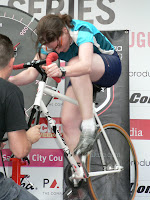 Ali M fastest female on the rollapaluza with 24.6 seconds, disappointed not to be awarded her prize by Chris Hoy himself at the end of the night! 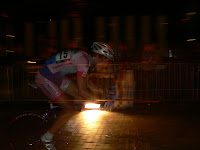 The pros on the circuit round the Quays, almost too fast to photograph.
Vikki
No comments:

Pedalled into Salford this evening with friends for the Salford Nocturne races. Got to give a good cheer to a few of our returning Olympians, despite best psycho-stalker efforts didn't get close enough to Chris Hoy to handle the gold!  Some great racing, Rollapaluza hi-jinks, beer and music. A top night out. Some photos to follow when I get chance.
Vikki
No comments:

After the very special experience of carrying a clay bike round the Sleepless in the Saddle course for 24 hours, this short bit of sub-aqua northshore at Dalbeattie was a doddle. Sadly the child-free week of biking in the Borders that followed the Joy of SITS, gradually morphed from holiday to endurance event itself as the steady rain continued day and night.

Hairyscary and I threw in the soggy towel on camping and retreated to a hostel at Keilder hoping to be soaked in hot water from pipes rather than cold water from heaven, alas, 'twas not to be. A 'very mild' dose of Legionella in the shower system (yummy!) meant ending another day with what my granny termed 'a hoor's bath' of a stand up wash at the sink.

We still managed to enjoy the riding and thanked our foresight of planning to do all the nice weatherproof trailcentres rather than brave the boggy wilds of 'natural' trails. The holiday was wrapped up nicely with a sunny but still muddy '10 More in Moray', No Fuss Events 10 hour enduro, where this Moray Minx Girl delighted herself by coming first in the ladies' solo category. Sadly my partner in biking, the other Moray Minx Girl, Roberta, was injured and sat this one out but did an awesomely fantastic job of keeping my spirits up as I ground out the miles.

Another year, another worlds... 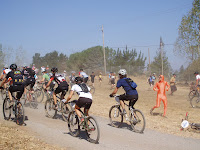 Say to people that you're racing the singlespeed world champs and they'll assume you're an athlete. Jaffa skinsuits, french waitresses, 'vintage' lycra, large white pants and a gimpsuited batman probably don't figure in their picture of the deciding of who is the toppermostest singlespeeder of them all. 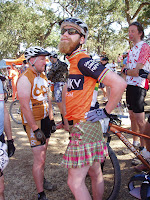 Because there is laughter and smiling. Meeting with once-a-year friends and longed-for faces that have and haven't changed and toasts to the absent ones too. Proper racing on a proper course that provokes severe fits of the giggles in the heat of the midday NoCal sun and probably vastly exceeds legal endorphin limits. There are cow bells and heckling and secret smiles for the missing but remembered refrain to the Outcast's "you're all winners" banner. Prizes for the slowest and oldest and longest travelled racers and bikes of every breed in the box and then some. There is a course marker playing bagpipes and enthusiastic noisemakers at every step and intersection waiting to jeer and cajole and scrape up the pieces all with equal helpings of cheer. Bottle hand ups and tongue-out concentration and conversations at the tops of hills. Legs and arms and faces caked in sweat-stuck dust, kilts and bruises, bloody knees and beer. Lazing in the cooler shade and good socks for every racer and the chance to ride your one-speed bike in a fastish way without really needing to care about how fast you really go.

A day for trail love, not race love. The sun shone and we loved it. Ta Napa. 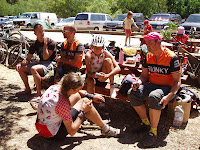 ...52 degrees and pouring with rain. the brits have landed.

bike fettling, big breakfast eating, news catch-up'ing, and general home reconnecting thanks to some lovely care packages, a brace of two mcvities digestive twin packs and a ziplock bag of yorkshire tea. the temptation to head south out of san francisco by bike and not east by train was substantial but plans were made so amtrak won out and it's great to be here with familiar faces again. looking forward to getting the kit off the bike and riding some trails; buffalo creek tomorrow (apparently an imba epic ride, and thankfully, also fast-draining...), then on to moab, fruita, elko and beyond. rah.

oh yes - and hello to tim and his exploding nettle beer :o)

tuesday morning and fog so thick that it could have been the severn bridge and not the golden gate that i was riding over. clocked 1020 miles at the apex, deep waters and pelicans swirling below; it was supposed to be a 900 mile trip but diversions for cake add up to a few more, as usual.

oregon was just lovely, but california is weird, a strange mix of hippy-unfriendly that makes me wonder whether or not it's worth the effort. for every nice person i meet, there's another wacko just around the corner waiting to harangue me about the "english" and "their" war (be that the current situation or WW2 it seems we, or even i, am to blame for both and all). this morning's relief to slip into the city streets and become no-one again; bike tourists stuck out more and more the further south we came.

the gdr comedown has been neatly tempered by the trip down the coast. there is a happy rolling community all heading south; new friendships, in that pleasantly transient way of brief nights around a picnic table over supper and beers, endless superficial chat, no need to reveal or share too much, but a few days ago i realised that i needed to escape the slower pace we'd fallen into and exhaust myself again. it seems that some habits die hard and sleep becoming elusive means that i simply have to work harder to tire myself out before my head hits the pillow. unless i want to spend the night feeling my legs trying to pedal their way on down the road alone. i'd hoped that this would be something i could escape once 'it' was over but maybe not. maybe it was like that before 'it' all began. i can't remember.

so, a few hours in the city, wandering around on foot, accomplishing mundane chores and waiting, really, for a train to denver where i'll see the first familiar face for eight weeks. this blog (and emails, and trip planning, and checking back in with the world for really far longer than is polite) kindly bought to you by the apple store, san francisco... 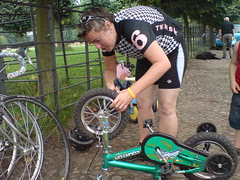 DSC00177
Originally uploaded by Nosila107
A lovely ride out (via Bicycle Doctor in Manchester) to Dunham Massey (best tea rooms ever) in the sunshine with friends. Luckily the pesky mechanicals weren't ours but we were on hand to help out a fellow rider.

I don't know whether to blame Mother Nature or The Rain Gods, but either way can someone out there tell them it's August. In the Northern Hemisphere this is meant to be summer. I should have ridden today in a vest top not a waterproof. Sunscreen should have been in my bag not armwarmers. My post ride treat should have been enjoyed on a sun terrace not dripping and huddled in a cafe.