I crashed my bike a couple of weeks ago. It was a big, fast, rock/sky/rock/sky/sky/rock/sky tumble-drier of a crash and as well hitting every bit of me from my liitle toe to the back of my head on the way down, I pretzled my front wheel so badly I had to jump up and down on it so that it would turn in the fork (scuffing the paint off the brace as it went). So I sat out the ensuing race to scrub grazes and offer encouraging hecklement and then we went to the pub as nothing was hurting that much (and certainly not enough to keep me from the Pippin). Needless to say, once the adrenaline and then the beer had worn off, it did hurt, quite a lot actually, and I now have a few more scars, strong painkillers, an irritating cast and a nice bit of metalwork holding my left scaphoid together whilst it slowly, slowly heals.

This is what we do, we ride bikes, and sometimes we get it wrong, and ninety-nine percent of the time we walk away from the getting it wrong with only a few bruises whilst the other one percent bites a little harder.

But people seem to want to know why I crashed. What was at fault. And really, there's nothing to blame. A multitude of things might have contributed to it happening. I was tired from the Saturday's road ride and just a little bit hungover after a good night at the pub with friends. I was on a trail that had switched from damp and velcrogrippy to dusty, ballbearingsonateatray dry in the 48 hours since I'd last been there. I'd hopped straight onto the Anthem after a month of riding much longer forks and slacker angles without so much as a by your leave, and fitted nice new tyres the night before too as well as wearing an untested 'lucky' jersey. I'd gone out for a practise lap late because I'd been left hanging around whilst the marshall briefing went on, and on (and on and on). I'd read an unwelcome text just before heading up the hill whist I was waiting, and drank all of the very strong coffee in the flask, too. And then I'd been held up by a few slower riders, so I was in a hurry, worried that I was going to miss my start. And - probably - I was looking at the view, instead of the trail, because how often do you get to look at a big fat swathe of the Pennines bathed in April sunshine with a heat haze shimmering over the top?

But none of those things are reasons for crashing. I've been doing this for long enough to know that they'd all have been negated by a little bit of concentration applied in the correct place. Looking for something to pin the blame on, when you've nobody to blame but yourself, doesn't solve anything. Rant about tyre choice and fork pressure and trail surface all you like but the buck still stops with you. Because you're the one at the controls. 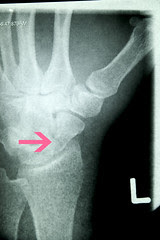 And sometimes, for no reason at all, bad things do happen.

i blame the jersey myself ;) hope the healing's fast

It's probably the bike, isn't that what is always at fault?

You would think so, but much experience has made me realise otherwise :-)

No running yet, been really poorly post-op. Went for a 20 mile walk yesterday, though. Knackered!

A 20 mile walk? Is that right? Was it some sort of ultra-endurance walking event? :~)

It was the Hardcastle Crags/Gorple/Widdop/Windmills/slabs/Cross Stone loop I'd really been looking forward to riding in the dry. I see no reason to miss out on all these dusty trails :-)

I was up there yesterday as well, just on a bike. Did the mary townley loop!

Travels with my Mule said...

Fantastic blogsite. Most entertaining and informative.
definately one for the blog roll. I will follow with great enthusiasm.

Hey Jennifer, if you want to do that walk again, let me know, thats just the ticket for this years Munro's and it'd make a nice change :-0

Can I hop along with you :)

Hi Jenn, hope your injury is coming together OK. I see you're doing plenty of writing for the bike mags, and I'm really enjoying reading your work. Can you get to any NPS XC races in a racing and/or reporting capacity? We need good reporters! Hope to see you back on the trails soon. Jenn O

Hi Jenn
just found your post, looking for other womens cycling blogs. i have the utmost sympathy for you as my 7yo daughter has just had her first ever big bike crash and broken her wrist! Funnily enough we were on a large organised ride and several people have suggested "someone" must be to blame for her accident - no, it was sheer bad luck end of.
Anyway hope you heal well and you are now on my blogroll and i will be checking back again soon!
Yvonne
www.unfitbikerchick.wordpress.com