I rode my bike

Bless me Minx, for I have sinned, it has been nearly seven weeks since I last rode my bicycle. I have my list of excuses, "I've been doing a lot of running" this is partly true. I have been doing some running as I'm entered in the Saunders Lakeland Mountain Marathon, but not so much running that I couldn't find time to ride. "I've been very busy, finishing of my degree," again, true, but not so busy I couldn't find time to ride. The truth is I've just been too lazy and today, spurred on by comments on a friends blog, about not being the woman who became obese through not being able to stand the sight of yourself in cycling shorts, I donned my lycra, dusted off my road bike and went out in the sunshine. 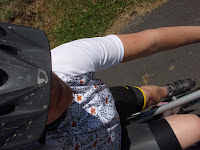 I'd like to wax lyrical about no noticeable lack of bike fitness, how I became one with my bike and cut through the country lanes like a hot knife through butter. That, however, would be about as accurate as your average MP's expenses claim. Oh, God, I'd forgotten how much it can hurt, every turn of the cranks a cruel punishment for my slothful ways. This is the start of a summer of returning to riding fitness, I've done that first ride, I just need to continue to step away from the cakes and onto the bike!
Vikki

j. is also available for coaching/mental cruelty via text and phone ;)

Know that feeling! Keep it up! x