Because it’s been so snowy up this way over the last few months, it’s been kind of difficult to get out for any big off road rides – the hills are still pretty snowy! So, after months of being limited to trail centres, I needed somewhere different to ride.

So a few weekends ago we caught an early train from Edinburgh to Dundee to start the First Big Ride Of The Year. The plan was to ride the Fife Coastal Path from Dundee back to Edinburgh over 2 days.

The Fife Coastal Path is a 150 kilometer, mostly off road, trail that goes from Newport on Tay in the north of Fife all the way to North Queensferry in the south of Fife. The trail follows the Fife coast, as the name suggests, through Tentsmuir Forrest (which was an area of sand dunes which was forested by POW’s during the 2nd World War), past Leuchars RAF base, through St Andrews, along some isolated beaches to Fifeness, then along the south coast of Fife through some pretty little fishing villages in the East Neuk like Crail, Anstruther and Elie, then on through the more industrial / old mining parts of south Fife, through Kirkcaldy then on to North Queensferry.

Since we were travelling by train to the start, we had an extra few kilometers from the station in Dundee over the Tay Bridge to Newport on Tay (it’s probably not really more than 3 or 4km, but since Chris managed to leave his helmet on the train, we had to ride about a bit to find a bike shop before we could get started….my new Favourite bike shop, Bike Worx, opened half an hour early to serve us…how nice is that?). We also had an extra 20 km or so at the other end from North Queensferry back to home in Edinburgh.

Since we still have limited daylight, we decided to make an overnight stop in Elie and sample the delights of the Ship Inn. We stayed in the wee B&B next door to the Ship Inn, so we didn’t have to stumble too far to get dinner and a beer on Saturday evening (or to far to go home when we started falling asleep in our beer at 8pm!).

Since this was the first big ride I’ve done since last Autumn, I had completely forgotten that you’re meant to eat lots. So I bonked big time on Saturday. It didn’t dawn on me that I’d bonked…I just thought my legs had given up and I’d lost any fitness I had, it was only when I sat down despondently to look at the view and had some of the tonnes of food I’d stashed in my pack and pondered how I was going to manage to get to Elie before it got dark, that I realised that I had hardly touched any of the food I’d brought. Oops. 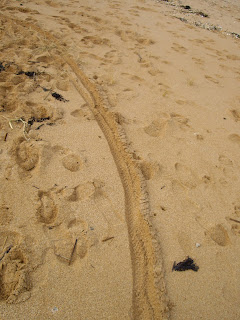 Somehow we managed to get lucky with the tides this time and we were able to ride almost 10 miles along pristine (ish), deserted beaches over the 2 days with nothing but views and our own tyre tracks in the sand. The only down side of that is that riding in sand for that long is pretty hard going, but it was worth it.

We were super lucky with the weather too and actually managed to take of some layers on Sunday. It wasn’t anywhere near warm enough to try exposing any skin to get some colour into our blue legs, but reducing it to 3 layers was a real treat!

With just 30 km to go, I managed to get a monster thorn in my front tyre…..so monster, in fact, that it went right through 2 sides of the tyre! The weather gods took pity on us though and made the sun shine even stronger and the wind die down completely while I fixed my tyre and got a new tube in.

Once we crossed the Forth Birdge, I could almost smell home, but there was still 20 km and that hill at Barnton before I could get that mug of tea and cake that I felt I’d earned. So near yet so far but we made it and the cat was ever so please to have us home again.

Next? My bags are packed and I’m ready to fly out to Spain tomorrow morning for a week of riding big hills before heading back to Portugal to have another go at racing there. Not the Trans Portugal this time – a 2 day enduro. Hopefully I’ll get a wee bit of sunshine but not quite as much heat as last time! 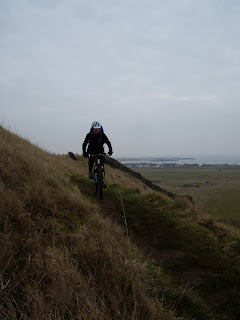 The placenames bring back memories of university. I walked a lot of that path but at that time I didn't cycle...such a shame. Maybe one to put on the to do list. Sounded like a nice adventure.

Sounds awesome. I'd love to know what the Spanish 2 day enduro you're doing is called. Sounds fun. I'm in Spain at the moment!