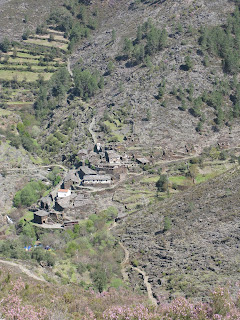 I’m not sure how to begin to explain what the Saturday race was like – I’m still trying to digest everything we saw! 110k, 80% off road, 3970m of climbing (and descending) through some of the most amazingly remote scenery and terrain. The area we were riding in was very sparsely populated, but the villages we did ride through were like stepping back in time…chickens, goats, sheep and cows running around the streets and ox pulling farm carts along the roads. We also rode through an abandoned village called Drave which sat at the bottom of a gorge only accessible by a fantastic techy, rocky descent and climb back out with a pretty sheer drop off the side of the (which very few folks other than Chris and I rode…all those toothy descents at Ciclo paid off!). The village was very isolated, but had a lovely stream to re-fill water bottles and camelbacks (and dunk heads in because it was about 30 degrees by this time!). We also rode across rocky moorland plateau, roman cobbled tracks, pave roads, knee deep snow melt streams, buff singletrack, dried-up stream beds, scree slope descents, medieval packhorse trails…..you name it, we rode it. All the little churches we rode past seemed to play fantastic tunes with their bells, which sent us off on the next climb. Top that all off with encouraging shouts of “Forca!” from locals and other riders, it was quite amazing.

We were both so awe-struck by what we saw that we ended up stopping periodically just to take it in and take photos. Obviously that’s not the best race strategy, but it was a bit of an adventure too, so we didn’t mind. 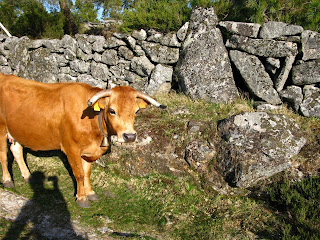 It was a big old day’s riding and we both really suffered with the heat. I was at least a little bit acclimatised after my week in Spain, so didn’t suffer quite as much as I had last year, but Chris was really suffering by mid-afternoon and we had to make frequent stops at any stream or fountain we came across so that he could dunk his head in to cool off.

The organisers knew that we’d be suffering with the heat, so they periodically appeared by the side of the trail to make sure that we were okay. When we eventually rolled over the finish line, we got a big cheer and big hugs and smiles from them all. We had taken a lot longer to complete the day than we had expected, because we had to slow right down in the heat (and also because we stopped several times to take in the views and take photos), but we had still managed to pass lots of other riders, mostly because we were able to ride most of the techy stuff and make up a lot of time that way. So we certainly weren’t very high up the leaderboard, but we were far from last…there were still teams coming in after dark! 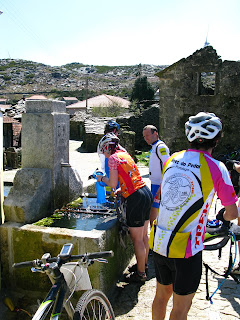 We decided that because we’d taken so long to do stage one and Chris was badly de-hydrated and broken because of the heat, we wouldn’t really be able to finish day two, then make the 6 hour drive back to Spain. So, instead of racing day 2, we took the tourist option and went sight seeing before heading back over the border to Spain.

So, Portugal beat us again, but we’ve decided that we’re definitely going to go back to try the Geo-Raid again next year with a bit more time for travelling before and after the race so that there’s less time pressure.