Having just recovered from the hole in my knee caused by hitting the deck at Bristol, I gathered my kit together into several large IKEA bags and headed to Yorkshire for the 2nd race in the Open Adventure Racing Series. The first race is 5 hours, the 2nd is 12hours and the 3rd (in a month) is 24 hours long.

If you've never adventure raced, then give it a shot. It's such good fun. You are time limited and in pairs and have to chase all over the countryside (we're talking the Best of British here - Lakes, Dartmoor, Yorkshire Dales, Highlands, North Wales etc etc) looking for checkpoints. In addition to mountain biking and running there is often kayaking, climbing, abseilling, a bit of swimming, canyoning and caving.
The Open 12 was hot hot hot and I can honestly say for 12 hours I pushed somewhere beween 98 and 100%. We had won the Open 5 so were 'series leaders'. The clear favourites (who beat all the male pairs too) had missed a checkpoint on the orienteering stage so we had 30 points on them. In the Open 12 they beat us overall by 29 points... and the Open 24 is on TV (Channel 4) so I'm looking forward to a bit of fame (sweat-soaked, unwashed as I will be)...
The Open 12 started near Hawes and went, well, everywhere. A 3ish hour run stage had us high up in the fells and after scrambling up through a canyon with some refreshing dips in freezing water, we jumped on the bikes for a 5 hour mtb stage, complete with a waterfall scramble and submerged checkpoint beneat Hadraw Force - the highest freefalling waterfall in the UK. Very, erm, breathtaking (was very cold!) Luckily it was sunny and windy enough for us to dry off pretty quickly when we were back on the bikes.
After a midge-ridden over night camp chatting with the other competitors and our team (team For Goodness Shakes), who had 4 pairs in the race, we set off for day 2 - a 5 hour stage. This began with a tandem abseil off an overhanging cliff and then a 16k trail run towards Semer Water, which we had to swim across, complete with bike helmet, pack and running shoes! At the other end we met our bikes and had a 2ish hour frantic ride around the dales in the baking sunshine, desperately trying to clear the course within our time limit. We knew that Planet Fear (the favourites) had beaten us by 25 points the previous day so if we could clear the course we wouldn't lose our series lead, even if they took much less time.
We thrashed up the final hill to the finish line and were unfortunately 1minute 37seconds late, which gave us a 4 point penalty - but still 1 point ahead in the series table. I am now at home tending festering blisters (my crash at bikefest rather limited the amount of running I've been able to do!) and reeling from getting home to find our 2 hardtails had been stolen from the garage. [If anyone sees two beautiful Whyte 19 trails out there looking a bit homeless, they're ours. Andy's even has 'Andy Wilson Team For Goodness Shakes!' engraved on the USE seatpost!] 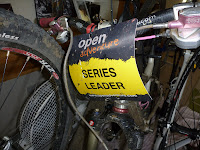 Another lovely weekend, then, tearing around the countryside on bikes and foot and generally having a rip-roaring time with mates. Awesome.
Fi