Snowflakes that stay on my nose and eyelashes... 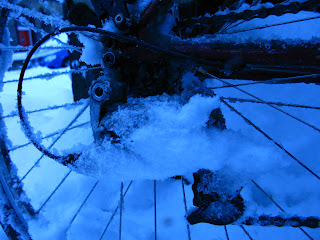 ...and my fingers and feet and lights and bell...

After a week of having to commute to work by bus and trudge several miles through the snow every day to catch the bus last week, I was fed up and desperate to get out on my bike (even if it was just to commute) so last night I decided that, no matter what, I was going to cycle to work today.

So I dug out my toastiest winter kit, packed up my pannier and went to bed happy in the knowledge that I wasn't going to have to sit on a bus in the morning. The weather forecast was for some light snow flurries, but generally just cold.

This morning I woke up and no more snow had fallen (none of the foot or so in the garden or in our street had gone either mind you), so got myself ready for riding to work. Then just as I was going out the front door at 7.20, it started to snow a bit.

Although it snowed most of the way to work it was quite light, so quite pleasant. The roads were pretty quiet too, so I smiled all the way in. Then just as I reached the gates at work, it got a bit heavier. Phew! I thought. Made it just in time.

Well, that's what I thought!

It just kept snowing and snowing! At 2 o'clock, we were all advised to start making our way home. All of the buses and trains in the Edinburgh area had been cancelled, the motorways were all grid locked because of snow, the Forth Road Bridge was closed and most of the local schools were closing again.

Most of my colleagues either had the prospect of a 2 or 3 hour walk home into Edinburgh or being completely stranded at work.

The roads were surprisingly quiet on the way back into the city, but because everyone was trying to get home at the same time, the roads out were at a standstill. I wasn't quite sure how my tyres would cope in the slushy / snowy icky stuff on the roads, but they coped better than most of the cars which were getting stuck at every set of traffic lights. Aside from a few exciting slides, the only problem I had was that my gears froze and my freewheel kept freezing.

All I can say is hurrah for winter boots (my new, un-holey ones arrived on Friday), amFib tights and bicycles!

Sounds like an adventure! Glad you made it home safely,and that you had the good sense/fortune to be riding :). We hd about 8 inches fall here since Saturday.

It took my mum over 3 hours to travel from Hermiston Gait to Broxburn on the M8 yesterday, normally about 15 minutes. I was just pleased she got home ok. You did the right thing being on the bike.

We have absolutely no snow here just ice but as ice is my nemesis I'm avoiding taking the bike out.

Julbags - it sounds like your mum was one of the luckier ones! Some of my colleagues called in to work this morning to say they had just got home after spending the whole night on the M8 or M9.

Today's ride was even colder than yesterday but another day of traffic chaos meant it was the only way to get home again. Made all the more fun by the off-road bit I took to get away from the queues of lorries...more like off-piste! I ended up on my bum in a huge pile of snow with the queue of lorries and cars all watching. All I could do was giggle, wave and get back on the bike!