Running out of excuses 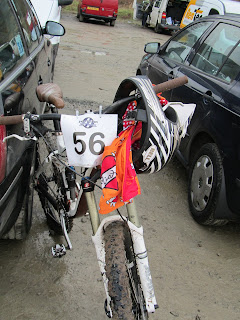 Sunday was "The Big Day".

Over the last week I had got more and more nervous about the race until, come Saturday night, I could hardly sleep. I usually get nervous before races, but it's usually nerves about how I'll do and whether I'll be able to do as well as I'd like to do, but it was different this time....I was nervous about whether or not I'd survive! Would I crash horribly and break everything? Would I be so slow that I'd get in everyone's way and end up causing a pile up? Or worse still, would I end up chickening out and not finishing the race?

So when I woke up on Sunday morning, I lay in bed for a few minutes taking stock...nope, my legs hadn't broken overnight, so I couldn't use that excuse. Then I went downstairs...nope, the car hadn't been stolen, so I couldn't use that excuse either. Car keys weren't lost, bike was still in one piece, shoes hadn't disappeared, hadn't run out of contact lenses, so it looked like I was going to have to do it.

It was a really cold morning, so I packed an extra few layers into my bag and then jumped into the car. As I left the house, I could see that there was a light dusting of snow on the Pentlands and on the drive down to Innerleithen, the temperature got colder and colder (could I just say that I'd not brought enough warm kit and had to go home?) and then the snow started (maybe it would be cancelled). By the time I pulled into the, already busy, car park, it was obvious that the race was on and a few folks had already started heading up the hill.

I decided to get myself organised and head up the hill as soon as I could, otherwise nerves really would get the better of me. So after a few encouraging words from Helen, I picked up my dibber from Dan and started my slow ride up the hill.

The views weren't as lovely as they had been last weekend, so my mind was racing with "what-if's" as I rode up. 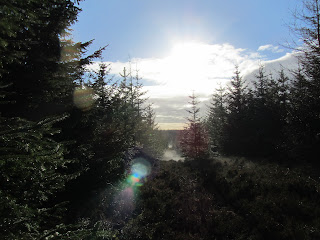 Chris had volunteered to marshal at the race and was waiting for me up at the top of the hill when I got there, with offers of chocolate, cups of tea and words of encouragement. There were only a few of us at the top, so I asked the guys behind me in the queue if they wanted to go first since I'd be mincing and slow, but they said no, so I warned them again that I'd be really slow, so could they wait a wee bit before coming down? I expected this to be met with rolled eyes or groans, but they were quite happy to give me tonnes of space. Phew!

So I dibbed my dibber and set of on the first down.

Dan had taken me down this one a few weeks ago and I'd been back to play around on it last weekend, so I knew what was coming. The full on crash last week had left me a bit shaken (and with a fat lip and swollen cheek), but I forced myself to put all of that out of my mind and just focus on what I was doing. I knew there were bits I had minced badly before, so kept expecting to get to them, mince again and come off, but I found myself down at the next fireroad being dibbed in by the next marshal before I knew it. I had somehow managed to make it down the first down.

There was some chat with other riders about what was coming up next. They started talking about how difficult stage 2 was and I started to get a bit nervy again. Afterall, Dan had taken me down stage 2 and I thought it was okay...it was stage 3 I was worried about, but all the others were talking about stage 2 as if it was the trail of doom! So there must be a bit of stage 2 that Dan didn't take me down.

Since I'm very good at getting psyched out, I decided to head back up the hill again before I heard any more about stage 2 and just get it over with.

Back up at the top, I bumped into a few familiar faces and got more words of encouragement from Chris and the other marshals. A few folks headed down stage 2 in front of me, but there was nobody behind me as I dibbed again and set off.

This one was more pedally at the top but it wasn't the trail I was expecting it to be....this was what I thought was stage 3. I knew the top bit was fine, it was the middle and the bottom bit I wasn't looking forward to. There were some pretty gnarly bits coming up that I'd had to walk when Dan took me down this one, so I was waiting for those bits to come up. I rode past a couple of guys who cheered something at me (I couldn't really hear very well through the full face helmet, so who knows what they said, but I'm fairly certain it was something encouraging). I managed to avoid the urge to grab big handfuls of brake and next thing I knew I'd reached the end of the middle bit and was greeted by cheers from the marshals and medics....I'd somehow managed to ride all the bits I'd had to walk the other week!

I knew I couldn't ride the bottom bit though. It was near vertical, loose, greasy and, quite frankly, bloomin' scary! So I rode as far as I could and then made use of all the cyclocross riding I've done, jumped of and slipped and slid down to a slightly less vertical bit before jumping back on to ride down to the waiting marshal and dibber at the bottom.

I'd made the trail of doom without crashing horribly!

The ride back up to the top for my final down was a long climb. There weren't many people around, so I had the forest to myself for the 30 or so minute amble back. After a few minutes of riding, I realised I was smiling and humming away to myself. I had one more down and I knew the last one (which I had thought was stage 2) was going to be a good one.

Back up at the top, there were still a lot of people just setting off on their first down, but Chris was still there with shouts of encouragement and offers of chocolate (I don't think everyone was offered chocolate though!).

Final dib and I was off.

The top section was straightforward enough, then across the fireroad, down the steep drop in to the fast, rooty, wiggly, tree dodging section. I knew there were bits on this section I had struggled with, like the massive drop offs (okay, maybe not massive, but they seemed massive to me) and the steep switchbacks, but again I managed to avoid the urge to grab handfuls of brakes and shut my eyes, and I forced myself to ride the first big drop off and the next few were suddenly much less scary.

Then I rode past a marshal who blew his whistle. Not being used to the whole downhill thing, I assumed that meant I had to get out of the way, so I pulled over, jumped off the bike and looked around to see the fast guys come past, but nobody came. So I hung around for a little bit, shrugged and then got back on the bike. A little bit further down, another marshal whistled at me, so again, I got out of the way, but nobody came past me. So when I passed the next whistling marshal, I decided to just keep going. By this time I could see the bottom, but managed to slide on a particularly greasy corner and gracefully sit down beside a tree....right in front of the girls with cameras.

Luckily it was only the girls who saw and they just cheered encouragement at me, so I jumped back on, round the final few lovely bermed corners, round the tree and to the final marshal to dib for the final time.

I had made it and not only was I still in one piece, but I was grinning like a looney and had really enjoyed myself.

I rolled up to the timing tent to be welcomed back by Helen and Dan who ware both eagre to hear what I thought of the course and how I'd got on. I got my final times and my hoodie (my prize for being one of the first females to enter the race), which was very welcome since it had got properly cold by this time.

I managed to get changed and watch the last few riders come down (whilst gibbering away excitedly to my friend Jo and telling her all about my heroics and adventures - sorry Jo, I must have been a real bore!) before the prize giving. Unfortunately, because it was so cold, most folks had headed off as soon as they'd finished their race, but I hung around and found out that not only was I not dead last, but I'd managed to come 4th!

My aim had been to get down the hill in one piece, without crashing or getting in everyone's way or chickening out. In the end, I was so glad that my excuses had all fallen through because if I'd used the excuses, I wouldn't have had nearly as much fun.

I'm not sure that I'm ready to take up Helen's offer to do the mini downhill in a few weeks time, but I think I'll have to invest in a full face helmet of my own once I give Jenn back the one she loaned to me (even if they're not the most flattering look for me!), and I think I'll go out to play at Innerleithen a bit more. 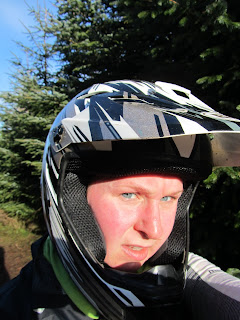 entries in for this next then? :)

Erm...I think the keys might be lost, or maybe the cat's eaten my shorts or....