As the big day approached I started to get more and more apprehensive about the task ahead of me. Tears were shed. Kit was organised. Re-organised. And then organised again.

The night before I woke up every half an hour and panicked some more, which helped a lot, as I'm sure you can imagine. But then, at last, 5am was there and we got up and on with the day. The pre-race organisation was a little, umn, Gallic, (ie no instructions and entirely up to you to ask people / work it out) but I found myself in the right pen and next to a lovely English woman to whom I could chatter to take my mind off the wait and the freezing cold (6oC in race kit isn't really the most fun thing). 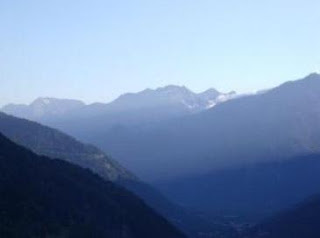 And then finally our pen of 5000 - 9000 start numbers set off with a chorus of clicking cleats and swear words as various people proved, not for the last time that day, that they don't know how to ride in a straight line or at an even speed. The sun was up, the mountains were glorious and various lovely lovely people were lining the road at this unfriendly hour to cheer us off.

The first few hours were pretty stressful given the volume of cyclists, with people swerving, stopping, speeding up, shoulder barging and generally behaving like drunk people at a disco, but I stuck with a few French Velo club guys and tried to keep safe and keep ticking off the miles.

The feed stations were complete bedlam (see pic below of the queue at the first Col for the feed station) and unless you brought specially sharpened elbows you'd have no luck. I gave up and stuck to rural fountains and the food I'd brought with me.

As the Marmotte is a very long, hilly, sportive (174km with 5000m of climb), it was always going to take me A Very Long Time, so to take my mind off it all I resorted to my usual sportive games :
And that got me as far as Valloire and up much of the Galibier. And there I made my schoolgirl error of using untested foodstuffs. EPIC FAIL. I had forgotten to buy enough gels to take with me, assuming that I'd be able to buy the necessary out in France. Mais non. So I ended up with a different brand that, it transpired, my stomach he did not like. At all. So with many a lurchy UGH I'M GOING TO VOMIT I made my way up the Galibier. Very. Very. Slowly. Dolly Parton was called into service. 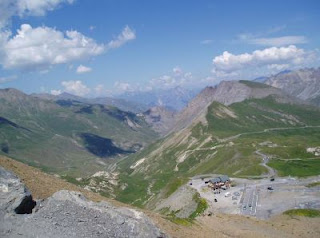 At the top I ate my last remaining energy bar that was pre tested and thought that as no mad efforts would be required on the descent, my stomach might settle down. I underestimated both the stubbornness of my stomach and the windy nature (both twisty and gusty) of the road. So at the bottom of Alpe D'Huez I was still feeling decidedly queasy. And yet I took the bizarre decision to have another of the stomach-churning gels (the logic was that calories = good, I think) before setting off. The 21 virages seemed to last for an eternity, with shouty rock music urging me on as I sobbed and churned the gears. I was utterly miserable and I don't think I looked at the view once! But I got there. And my official time is 9h45*. Getting round in under 10 hours with no tears was my target and I managed 50% of that, so I'm pretty chuffed. 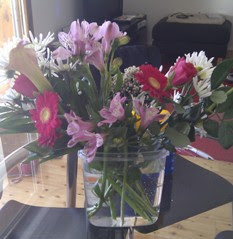 The boyf (who'd finished 4 hours earlier) met me at the end with coke and crisps and a bouquet of victory flowers and despite being rather shocked by the sobbing and the lack of speaking (I am normally the chattiest person in any given situation) for "the longest time" he gently nurtured me back to good humour and laughter and even got me talking about ideas for my next challenge! It's amazing how quickly you forget pain...


*Official time excludes the descent of the Glandon. In theory to make people descend in a rational, safe, fashion, as the time it takes doesn't count. It didn't quite work like that in reality. Anyway, total Garmin time was 10h30.

I'm glad someone else spend time doing hard sums to keep going. Funny how you can make time pass!