It was my 6th Trans Wales and the last one. Cue sobs and violins. This time, I was going with my fiance to have a holiday. We were racing solo but planned to ride together. We are almost exactly the same pace. 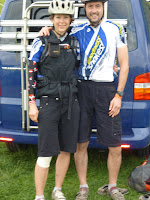 The week was a delight. There were 180 riders and I can honestly say I had a proper conversation with all of them. There were people from Nepal, Belgium, Spain, America and 11 other countries. Matt Page was racing. There were speedy riders, slow riders, holidaying riders, racing riders. It was Wales. Mud, rain, sun, hills, sheep. It was perfect. 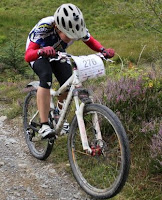 Andy and I took the days super steady and completely turned ourselves inside out on the 'special stage' time trials. We collapsed after each one (there were 7 in the 8 days of riding, including the prologue) in a heap of giggles, sweat and adrenaline-fuelled exhaustion. For the first three there was nothing between us. Andy had me by half a second, then I pulled back by 2 seconds... and so on. It became the most important race for us and received special mention by the commentary team after each stage! The fact that the solo women's race was equally as tight was not nearly as exciting.


Unfortunately, Andy fell off a cliff with two days to go. Not literally. His lack of riding caught up with him and he crawled round the last few days leaving me to scream ahead and take a convincing win! I have yet to decide what my prize should be. Bike washing duties for a month perhaps?

The Trans Wales (RIP) was a beautiful event and I always come away thinking that it is the one event which really captures what mountain biking is all about for me. It's fun riding your bike fast, but it's also fun JRA (just riding along) chatting to folk and enjoying the scenery. We took over 200 photos during the week and ate more cake than I dare to think about. My jeans are tight :-( 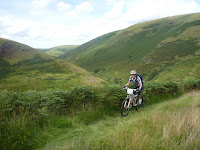 So, the Trans Wales will return in a different format. We hope. I'll keep badgering Mike Wilkens until it does. But now it's cyclocross time as we get ready for the Three Peaks (where I don't expect I'll be taking many photos at all!)