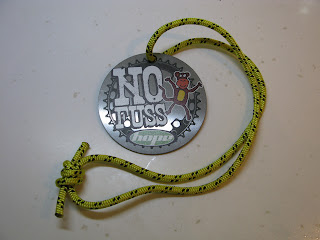 Well, it was quite a weekend....quite a wet weekend that is!

Chris and I arrived in Fort Bill on Saturday morning to the sound of rain pattering on the roof of the van. We set up camp alongside some friends, diverted the river that was flowing through the car park and our pit area, signed on, had a bite of food and then before we knew it it was 11.45 and I was lining up on the start line.

We had a vague race strategy to allow us both to get some riding in and get some rest too, but as they say, the best laid plans....

It rained and rained and then rained a wee bit heavier. Luckily it wasn't cold, but the rain and the gritty mud started to take their toll very quickly. Brake pads were wearing out in 2 laps; because we were doing double laps, kit was only wearable for a couple of laps (the wet and mud and grit meant that you had to change whenever you weren't riding) and the gazebo leaked, badly. A friend who was soloing had to pull out because he couldn't afford to go through any more brake pads!

Then it got dark and the rain got heavier.

After my second night-time lap, I went back to the van to tell Chris that I was mutinying only to find him curled up asleep! I took that as a sign, so I promptly went off to get some hot food and a hot chocolate before curling up for a few hours, fully intending to head back out before midnight.

Unfortunately the rain got heavier and the wind picked up, so there wasn't very much to entice me back out on my bike, so I curled up in my sleeping bag and listened to the weather raging outside.

Just before dawn, it calmed down a little bit but our pit was completely destroyed by the wind, so we had to pack everything up. What made matters worse, I had left both my waterproof jackets and my waterproof shorts hanging over the back of a chair in the gazebo...the chair had blown over and my things were lying in the stream which was running through our pit again. Great!

But it was daylight and there were still several hours to go before it was finished, so I decided I might as well put some soggy kit back on and get out on my bike again rather than just hanging around a wet car park waiting for friends to finish. Luckily, that made Chris feel guilty, so he was there at the transition area to take over when I got back in.

Just as the event was drawing to a close, the rain stopped and the cloud started to lift, so we were finally able to get a glimpse of Aonach Mor.

It was probably my least energetic 24 hour race. We actually did a 9 hour race on Saturday, hung about for 12 hours overnight, then did a 3 hour race on Sunday morning - quite a civilised way to do a 24 hour race if you ask me! Despite the terrible weather and bike destroying grit I think we ended up having a bit of fun and we managed to win our category too, which was an added bonus.

The clean up exercise is still going on though, but hopefully we'll get it all sorted out before I head out for what promises to be a very muddy ride at Innerleithen on Saturday!