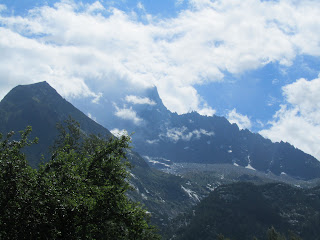 Last weekend Chris and I headed over to Chamonix to visit Dan and Jo. The plan was to ride Dan's new local trails and get some sunshine, but a few weeks before we were due to head out, we got an e-mail from Dan asking if we fancied doing a race while we were there. The race was an enduro in the proper Euro style, which formed part of the VTT MB Race, a weekend bike festival of races.

It sounded interesting, so we figured we'd give it a bash.

Unfortunately, the race website was all in French (obviously) and neither Chris nor I speak French. We could see from the website that there was an enduro, a street race, a 25k, 50k, 100k and 140k (with 6,6oom of climbing - eek!), but when we tried to find the right entry form, we weren't quite sure if we entered the right race!

The weekend finally rolled around and Chris and I flew out to Geneva with the DH helmets and pads, which are obligatory for French enduro races, as well as our XC helmets...just in case we'd entered the wrong race (and we were planning to do some normal riding too...if we survived the race!).

We arrived in Chamonix late on Friday afternoon to weather not to dis-similar to home, drizzly and grey, but quite a lot warmer. So we unpacked bikes and Dan took us out for a quick ride before tea.

2 minutes from the front door and we were on some lovely rocky, rooty singletrack and I had already hit my max heart rate! The mixture of trying to keep up with Dan and Chris so that I didn't get lost and the altitude and heat were playing havoc with me!

Anyway, the trails were too much fun to worry about my body not coping, so I just wheezed my way along, taking in the fantastic trails, just minutes from Dan and Jo's apartment. Lucky things!

The weather gods decided to make us feel at home by treating us to a monumental down pour. Within seconds we were soaked to the skin and at the furthest point. Hey ho...once you're wet, you're wet.

We knew we had an early start to get to the race on Saturday morning, so we bimbled back, ate tea and had an early night.

We were up and out by 7 the following morning to drive along to Combloux where the race weekend was. The skies had cleared overnight and we were treated to some fantastic views of Mont Blanc and the surrounding mountains, which we hadn't seen at all the day before.

Luckily, we had all signed up for the right race (luckily!) and with a little help from Jo, I managed to sign on, pick up my goody bag of swag, and get my start times for each of the 6 stages. 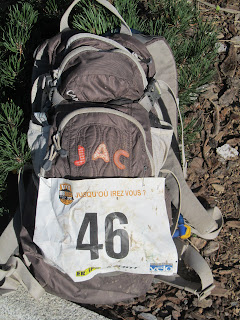 The rider briefing was all in French so we and the handful of other British riders just smiled and nodded each time everyone turned round to look at us.  Then I heard my name called and I was whisked off to the uplift bus and the day started.

Stage 1 maybe lulled me into a false sense of security with its trail centre feel, but stage 2 gave me a bit of a wake up call when I took the first 2 of my crashes of the day and managed to do a bit of damage to my shoulder and ribs and lose my bracelet (I was more concerned about my bracelet being smashed to smitherines all over the trail than myself at the time). But the first 2 stages went okay and I was comfortably in the middle of a very small pack of female riders.

Stage 3 didn't go quite so well...about 2 minutes into the run I got a puncture in my front tyre which sent me flying into a tree. The crash wasn't a biggie, so I dusted myself off and decided to try to run the rest of the stage since the other two had been pretty short. Unfortunately I was still running 35 minutes later! It was the longest stage of the day!

So my race was over, but there were still 3 more stages to ride, so I fixed the puncture and pedalled as quickly as I could to get to the next chairlift (yes! lift assisted enduro racing is the way forward!). I expected all the other girls to be gone by the time I got to the start of stage 4, but the whole race had been held up, so I hadn't lost my slot after all.

Stage 4 was super short and I was back in the lift again before I knew it. Then one of the marshalls shouted on myself and one of the other girls to hurry up to get to the start of the next stage, so we pedalled off in what we thought was the right direction...unfortunately it wasn't and we ended up riding up the 500m climb to the start of the next stage, when everyone else took the lift up AND got lunch! So we missed lunch and were slightly pooped from the heat when we caught up with everyone else.

Stages 5 and 6 took us back down the mountain towards Combloux with stage 6 finishing on the town's BMX track and then through the streets to the finish in the town square with masses of people cheering us on.

Chris and Dan rode in to town an hour or so after me and we all collapsed with a beer and recounted tales of crashes and heroics with the new friends we'd made during the day.

My puncture and decision to run rather than fix it cost me 3 places and put me into last 8th place, however it was a great day and a fantastic experience to ride some new trails.

On Sunday, since we were all nursing wounds of some shape or form, we decided to go for a local ride, taking the cable car up to a col and riding back down in time for tea. Dan and Jo had only ever skied the route we were planning so we weren't sure how it would work on bikes, but it turned out to be a great ride over the border to Switzerland and back barely seeing another soul. Jo and I both surprised the boys by riding bits of trail they didn't think we would want to try, so it was pats on the back all round by the time we got home. 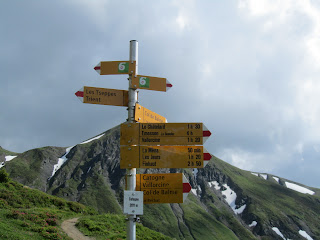 Then it was Monday  and time to come home, but not without one more ride in the morning on another of Dan's local trails with a 45 minute climb from the road followed by a 30 minute descent right back to the front door. 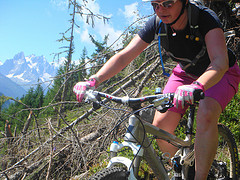 Riding in new places is great, but now I'm back at home, nursing sore ribs and shoulder from the race and looking out the window at the Pentlands wishing they were just a little bit more like the Alps. Time to start planning the next adventure.