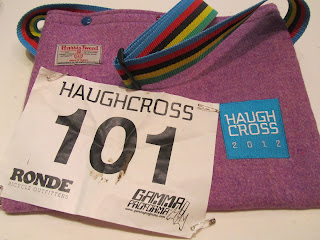 Last weekend I discovered that the ribs I'd broken when racing in Chamonix weren't quite ready for mountain biking. However, the boys at Ronde were putting on a summer cross race, Haughcross, on Sunday evening as part of a local festival week and Chris was doing the timing, so I figured I'd join the fun. Afterall, cross isn't as bumpy as mountain biking...is it?

I spent the afternoon helping out with sign on and being quiet impressed with the number of quick riders who'd turned up for this, non series, race...James McCallum of Rapha Condor, Davie Lines of Endura Racing, Craig Hardie of Hardie Bikes and Helen Wyman...yes, the Helen Wyman!

We closed sign on just in time for me to quickly get changed and grab my bike for a lap of the course and then I had to get straight to the start line.

I didn't ride much cross last winter because I was still recovering from my nasty face smashing incident, so the racing I did do  was a bit disappointing. Although I've done tonnes more riding this year, I'm still not really feeling as fit as I'd like, so I expected the race to be 40 minutes of pain and not much fun.

There wasn't a huge field of women unfortunately, but since we were racing with the vets and juniors, there was a reasonable turnout on the start line when the gun went and we charged off.

I managed to get my elbows out and through the bottle neck on the first corner. Since the event was part of a local festival, there was quite a crowd outside the beer tent all cheering us on (or sometimes giving us abuse for riding like a girl!).

After the first 4 laps, the stream crossing had turned into a bit of a muddy slog and the big puddle at the top of the course had turned into a proper cross style bog, but, since it's summer, the rest of the course was dry (ish) and fast....very fast! But the 3 sets of hurdles per lap were starting to make my broken ribs pretty achy and I knew the grimace wasn't fooling anyone.

As luck would have it, that's when I found out there was a whisky shortcut!

Now, I'm not a whisky fan at all, but I figured it was a fun event and it might just make my ribs a wee bit less achy. So, as I approached Jim the Whisky Man, I got a shot handed to me, which didn't quite reach me in 1 piece ... whisky flavoured gloves, tried to take a slurp, whisky dribbling down chin, all down my front...but the cheer and the laughter from the crowds watching my face screw up with the taste was a bit of a giggle.

Whether that tiny dribble of whisky helped or whether it was just my imagination, my ribs were a little less achy for that next lap, so when I got back round again to Jim the Whisky man, I figured I'd try another one...less successful this time and more whisky smelling gloves and jersey, but I managed a wee slurp.

Not being a whisky drinker, those two slurps did the trick! My ribs weren't as bad, but the hairpin corners were more challenging!

The finish came round quickly and I realised that I'd really enjoyed the race and I actually felt that I'd raced pretty well. I felt strong and comfortable (which apparently means I wasn't trying hard enough!).

The final race was the open race, which Helen had decided to race in, so as not to show the rest of us girls up too much! The racing was as nail biting and exciting as any series race with the top 4 places changing almost every lap. There were also far more people taking the whisky short cut option, keeping the crowds entertained!

I'm sure whisky shortcuts aren't going to make an appearance in the British Cycling rule book any time soon, but I reckon they'd be a welcome sight at some of those cold, wet, winter cross races and they'd provide a little bit of entertainment!

Wow - I have got to get the local organizers around here to include a whisky shortcut in our cx races - pure genius!