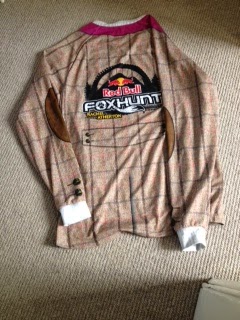 On Friday evening I had begun writing a blog about what a great year of riding I've had so far….adventures in new places, bimbles in familiar places and finally doing rides I've wanted to do for years.

You'll note I said I was going to…

I was going to start off by talking about the RedBull Foxhunt I was going to be taking part in over the weekend. This Foxhunt is the first female only event, with Rachel Atherton being the fox and over 120 girls trying to beat her down the hill (the worlds biggest ever female field!!)

Again, you'll note I said I was going to…

It didn't quite turn out as planned.

On Saturday morning, I joined Kat and Aga for practice for the Foxhunt. It was a lovely day with amazing, clear views from the top of the Pentlands out over Edinburgh and lots of girls out riding my local trails. After pushing up to the top, we set off on our first practice run. It was all going great and I was having lots of fun, but then it went a bit wrong and the next thing I knew, I was off the bike, in the air and landed on my shoulder with a sickening crunch.

Luckily it happened at a marshal point (I guess it was a marshal point for a reason), so a couple of marshals rushed over as soon as I crashed. At first I told them that, no no, I was fine and really didn't need a medic, but as I tried to get myself off the course and out if the way, I realised my shoulder wasn't doing quite what it should be. And the concerned look on Kat's face was enough to tell me that I had been a bit too quick to say that I didn't need the medic.

Luckily, the marshal had more sense than to listen to me and had asked for a medic to come and see me anyhow, so he appeared in no time and got me down off the hill and into the 1st aid tent to be checked out.

They decided pretty quickly that I really needed to get to hospital, so event organiser, Lesley, offered to take me to A&E herself. It was all so efficient and well organised, it was almost as if they'd done it before…oh, wait, they have and they're very, very good at it!

Lesley was great and kept me company whilst I waited to be seen, telling me exciting and inspirational stories about her adventures, taking my mind off my now quite sore shoulder.

It turns out that Saturday lunchtime is a good time to go to A&E and I was in and out in just over an hour, discharged with a sling and a broken collarbone (but obviously, I don't do things by halves, so I squeezed in 2 breaks, not just one!).

So, instead of training for WEMBO and a winter of fun riding and running, I'll be spending the next wee while training myself how to be patient and how to do things with one hand. Good skills to have I'm sure.

It'll also give me some time to plan my next adventure….