Are you tough enough?

What a great weekend! I went over to Kent - to Rye - for a very old friend's wedding. Thinking 'I won't know anyone else who's there, so it'll be an early night', I entered the 'Are You Tough Enough' Army Cycling Union 6 hour enduro the next day.
As is the way of these things, I ended up drinking too much champagne and arrived in very sunny Bracknell with a seriously dry mouth, no pedals and a bag full of squashed and disorganised kit.
Stuff got sorted (can't really remember doing it myself, but must have) and the race kicked off. The first lap was waaaay too fast and I was breathing like a steam train, so peeled it right back. I wasn't fussed about 'racing' and was riding with a camelbak for adventure race training - getting those back muscles nice and worked!
The singletrack was supersweet - no straight lines and lots of fast bermed corners and dust. We were caked in red-brown dust, which stuck to our sweat, snot and suncream. At one point a guy I'd been leapfrogging with over took me and I looked at his face as we exchanged a few words and it suddenly occurred to me for the first time that I might also look like a bourbon biscuit dunked in chocolate shavings.
The ride only became painful when excrutiating hot spots on my feet made standing very difficult. Until then I'd be riding out the saddle, attacking the climbs and working the corners hard. I rode the last few laps like a sack of potatoes. But by then I'd realised no one was chasing so I could relax and ended up climbing off with half an hour to go to drink tea and eat the pain au chocolate I'd sneaked from the B&B that morning.
I'd recommend this enduro - great course, lovely atmosphere and awesome prizes. And, which is tremendously exciting, I saw a snake on the trail! Only a little one but I nearly ran him over and screamed as I swerved to avoid it!
Fi 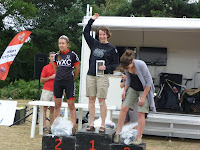 Top effort with a champagne hangover!

Fi, you certainly ARE tough enough! I slogged round a mere 5 laps for 3rd place. You did 7 laps ~with a hangover~ and despite claiming that you slowed down after your first lap, the Timelaps website tells a different story... ;-)

Hee hee, nice one Fi, glad the przes have improved as the girls ones last year were, well, crap compared to what the guys got.x

Yes well done from me to you and Jo - I did an even slower 5 laps and came 4th (out of 4!) At least I managed not to face plant this year though! ;o)

Thanks guys - I had no idea there were other minxes racing or I would have been far more sociable! I really enjoyed the race though. I think a Minx reunion next year is in order!