I've never been more east than Eastern Europe and I've always, always wanted to go to New Zealand, but it was always just that bit too far to go and I just couldn't find enough justification to spend that much time sitting in a plane. That was until the Singlespeed Worlds for 2010 were announced and they were in Rotorua, New Zealand.

All of a sudden, a trip to NZ to visit my aunt and uncle, see the country I've always wanted to see, catch up with some friends and ride a race seemed like the perfect honeymoon for Chris and I (okay, so it was a year after we got married, but we never were all that conventional!).

So after months of planning, we left work early on a Friday night and headed off to catch a flight to Auckland via Heathrow and Hong Kong.

The journey out was fairly uneventful and passed relatively quickly (I say relatively, because 24 hours sitting in a plane can only go so quickly). The most exciting bit, other than actually landing in Auckland, was probably landing in Hong Kong. Looking out the window, it looked just like something out of Swallows and Amazons... little craggy, tree covered islands popping up through the sea mist and little, brightly coloured fishing boats bobbing about just below us. A definite note to self to try to go back and spend more than 4 hours in the airport there!

Anyway, we got to Auckland, a bit sleepy, but generally ready to go. We only spent one night in Auckland before picking up our ace campervan and heading down to Rotorua. 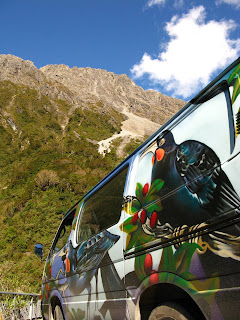 We had 5 days in Rotorua before the race and spent most of them doing tourist stuff with my aunt and uncle or riding around in Whakarewarewa forest, where the race was going to be.

The town of Rotorua is different to anywhere else I've been before. It's in a volcanic (live volcanic) caldera and so has lots of thermal stuff going on. From bubbling, steaming hot pools of water in the town centre, to stinky bubbling mud pools, to the infamous sulphur point. Riding around town and seeing steam coming up through the ground, or rising up from a clump of trees in the park is very different to riding around town here in Edinburgh, that's for sure! Oh, and the black swans swimming around on the lake are very different to the swans we have here in Holyrood Park. 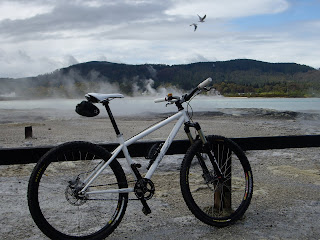 The only word to describe the riding in Whakarewarewa is awsome! The forest is massive - a combination of managed pine forest, giant redwoods and natural bush. There are also over 100k of bike specific trails in the forest which are maintained by Rotorua Mountain Bike Club.

The trails are all graded in a similar way to the trails here, from beginners trails to black "expert" trails and the National DH course and they're all really well marked, so it's pretty tough to get lost. It is, however, very easy to end up out in the forest for a lot longer than you had intended because it's so difficult not to ride just one more trail just to see what it's like...and, oh, we might as well do that one now that we're here.

The mix of trails, terrain and technicality was incredible. All singletrack, some of it buff and swoopy, some of it mad and fast, some of it lung busting climbing, some of it heart-in-mouth descending, but all of it fantastic! It was just like riding through tropical forest with tree ferns (Ponga trees apparently) and palm like cabbage trees alongside sequioas. 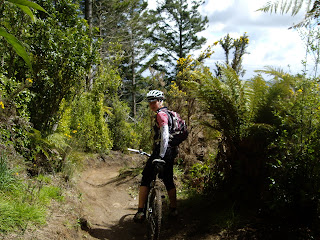 Race day was Saturday and it's possibly the busiest singlespeed race I've ever been to. With over 900 riders there were a lot of people and a lot of interesting bikes. Saturday was the first properly hot day since we had arrived in New Zealand, so it was off with the arm and knee warmers before we headed to the start. The race start wasn't the usual Le Mans, bike hiding thing of most SS races. Instead we had to do a kind of NAScar thing...900 folks riding around in a circle, very slowly for 2 minutes until someone quietly opened up the tape and riders started piling off up the first bit of track.

The trail started with a bit of a witch of a sandy climb which saw most riders off and pushing, especially since the traffic was very slow moving. The climb was worth it though, since we were straight into a bit of fast decent which had most folks grabbing bunches of brake.

From then on the trail got quieter and much more fun. I decided to opt out of all the beer shortcuts, only because it seemed a shame not to ride all of the trail. I managed to find a bunch of blokes to ride round with who were about my pace and skill level, so we kept egging eachother on to ride the techy stuff and make it up the climbs. After the first lap, I was completely out of water, so I had to stop at the beer stop and drink a beer to be able to get some water. (No! It's not just an excuse!).

Most folks didn't go out for a second lap, so there were none of the traffic jams I'd come across on the first lap and I could go as fast (or as slow) as I liked down the techy descents. I managed to clear everything on both laps and was feeling pretty pleased with myself until I got the the watersplash almost at the end of my second lap. I got through the water, up the little slope on the other side and then started down the sloppy descent back towards the fire road just as my uncle jumped out and shouted "Go on Jac!". I looked round to see where he was and lost it. Luckily he had a camera and managed to catch it all on film... 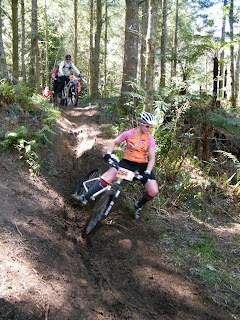 Just around the corner I rolled into the finish area to be handed a beer and catch up with everyone to share the usual post race stories and watch the decider for next year's Worlds. That also gave me the opportunity to check out some of the fantastic costumes. Those of you who know Damo will be pleased to see that he really outdid himself this year... 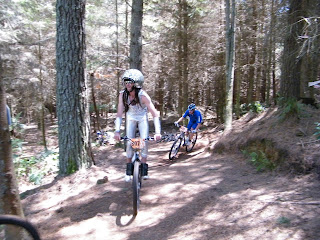 The decider was a sort of horizontal bungee where the contestants had to stretch the bungee as far as they could and place a beer can the furthest from the start. You'll be pleased to hear that the team from Ireland won, so we'll be going to Ireland next year and hopefully I'll see some of you there too.

There's a lot more to tell and a lot more pics to share from our NZ trip, but I'll save that for later.

Sounds like an excellent honeymoon and a brilliant race!