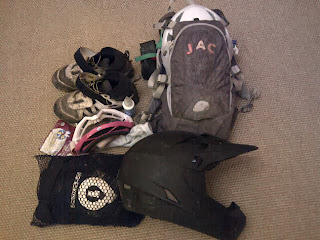 The last month or so has seen progress in leaps and bounds.

I can now remember conversations I had 5 minutes ago, don't wobble and bump into things all the time, can speak properly again, understand what's going on around me, can actually function properly at work and, yes, I'm back on my bike. I know I'm still not quite 100% yet, but not far off it now.

It's been quite a tentative return to riding though with quite a lot of tears along the way. I do remember how to ride a bike and I don't have any more sense of fear about riding stuff than I did before. However, there's a lot of frustration at just how much fitness I've lost - so much that one of my normal, hilly commutes really hurt like I'd never ridden it before! There's also a fair bit of nervousness about crashing again. In simple terms, I just can't afford to crash again! No pressure though!

Last weekend I tentatively decided to test myself by going for a ride with the boys at Innerleithen on some of the enduro trails. Aside from feeling like someone had tied an anchor to my bike on the climbs, it worked…slowly, but it worked.

My style of riding seems to have changed a lot though. Not intentionally, but I'm riding differently.

I'm reading the trails differently and I'm much more conscious of what I'm doing and how I'm doing it. I'm focussing and concentrating really hard, but riding more and better! I'm finding lines I've never found before and riding sections I've never been able to ride before because of it. I'm spending less time worrying about keeping up with others and just focussing on my own ride. Maybe I should've been doing that all along.

So, with all this at the back of my mind, I'm heading off to Kinlochleven tomorrow morning for the Dudes of Hazzard / No Fuss Enduro .

I've ridden some of the trails before, so I kind of have an idea of what to expect. That's making me pretty nervous! It's big and it's rocky and it slippery and it's steep. It'll also be freezing cold and maybe a bit snowy.

I'm not really planning to race. Instead, I'm going to ride the course, aiming to be DFL (you'll have to figure that one out yourself if you don't know what I mean) but finish in one piece with no incidents except maybe having some fun.

Just to be on the safe side, I've packed my full face helmet as well as my XC helmet. Oh and pads, but I've decided to run the risk of not taking the bubble wrap.

It's a big field so I don't think I'll have any trouble with my DFL objective. Hopefully I'll be able to keep the nerves in check and enjoy it too.

It's only a bike ride though. Right?